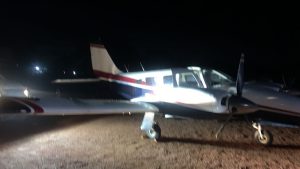 The Piper Seneca plane at Mahdia

A foreign plane without any visible registration marking on Thursday evening landed at the Mahdia airstrip in Region Eight (Potaro-Siparuni), a senior aviation official said.

There were no immediate reports of anything illegal aboard the twin-engine Piper Seneca plane.

According to the source, the pilot is a Venezuelan and the passenger is a Colombian. An aviation source remarked that once the registration marking could not be seen, the occupants “are up to no good”.

Within the past five years, at least five illegal aircraft have been seized in Guyana and a number of them has been made serviceable to be used possibly by the Guyana Defence Force.

Earlier this year, two foreigners were caught with hundreds of kilogrammes of cocaine in a plane at Orealla, Upper Corentyne River.