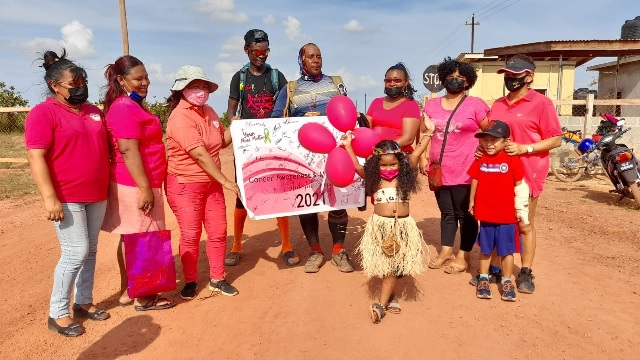 Tyson English and Michael Trotman with a bill board featuring Cancer and Mental Health Awareness courtesy Ride For Hope.

A Guyanese man, on Tuesday ended his  525-mile journey by bicycle from Georgetown to Lethem to raise public awareness about cancer and mental health, but expressed disappointment that the private sector and government agencies did not support him.

Tyson English, nevertheless, remains determined that no one else will steal his idea and hopes that ‘Ride For Hope’ will become an annual affair to educate and inform Guyanese about those two health issues. He was accompanied by Michael Trotman from Linden.

They left Friday and arrived on Tuesday.

Barring support from three friends, he said no other support was provided initially until journalist Rawle Toney took a picture and video of him as he was  journeying out of the City. He said the first plan was to get the more recognised businesses to back the initiative, ultimately to get a corporate sponsor to come on board to make it a signature event. He recalled hand-delivering letters to every possible known recognised established organisation, government ministries include the Ministry of Health and the Ministry of Culture Youth and Support. “Not even a simple acknowledgment that we would have received your letter and we are in consideration or anything of the sort but, of course, like I said with or without this support we already made the decision, I already made the decision that this thing is going to happen and it is going to happen how we want it to and when we want it to and when we want it to,” he told News-Talk Radio Guyana 103.1 FM.

He believes that his ‘Ride For Hope’ has raised awareness about cancer and mental health, based on feedback from persons overseas and local organisations as they were  unaware that such a mission was underway. His message to persons facing mental health challenges, who have contacted him, has been “don’t give up; there is always hope, there is always someone who is in a worse position than you and if they are making it happen you can also make it happen.”

Initially, they had decided to challenge themselves to ride to Lethem, having exhausted other off-road areas but when Mr. English’s aunt succumbed to cancer, they decided to do it for a cause. “I believe that two social issues have been overlooked for too long and if we can create an avenue from a completely different venture or where we can put ourselves in a situation both physically and mentally persons would pay keen attention and the message that we are trying to portray,” he said.

Though disappointed that he and his colleague rider did not encounter any wildlife on their way, he hailed the exercise as one that allowed them to better appreciate Guyana’s eco-tourism product. He was hardly concerned about wild animals such as jaguars or ocelots while riding through the trail in the night. “I knew that I had to be coexisting with creatures and my focus was just to get from point A to point B,” he said. Mr. English said that unlike travelling in a motor vehicle, by bike he and Mr. Trotman saw mountains, waterfalls, wildlife and other things.

In terms of physical preparation for the arduous overland tour, Mr. English said he and he his team have been riding long distances to Bartica, Berbice and Essequibo.

They are being accommodated at the Amazonia Inn and on Wednesday will be taken on an ecotourism trip in the Rupununi.

For now, Mr. English and his colleague do not know whether they will have to ride back to Linden and Georgetown or will be lucky enough to have their specially fitted bicycles and themselves transported back to Georgetown by land or air.

What was the most memorable leg of the journey? “I have never experienced those hills and I can tell you I lost track at counting forty-one hills that we had to climb day and night and some of them were almost impossible…so regardless of whatever challenge you may go through any point in life in the near or far future, that is one I would never forget because I have never in my life rode a bike or hiked over so many hills. It was as though there was placed there to challenge us mentally,” he said.

He explained that the standard mountain bike was customised to fit six to eight bottles of water, ration, camping stove, knives, machetes and clothing. The bicycle, according to the biker, was modified to include harnesses for bags, spare parts, lights. “Every single portion of the cycle we had to utilise as storage,” he said.  Priorities on the journey included being properly hydrated, eating appropriately and resting instead of sleeping.

After riding 525 miles from Georgetown and through difficult terrain day and night, Mr. English is not feeling sore. “I’m not tired. I don’t have any soreness in the muscles . There is no fatigue,  nothing at all because my life is based on exercising,” said Mr. English, a former Physical Education Specialist. I’m a bit surprised that my recovery because I have been noticing that my recovery has been so, so fast because I notice that I have been recovering within teen to fifteen seconds after all the year fatigue or any rush of anxiety,” he said.

Speaking also on Radio Lethem, he said he and Michael were faced with dehydration as the sun rose and so they opted to glide down hills instead of pedaling. On a number of occasions, he said they were searching for creeks and when no water was found passersby turned up with bottles of water. “I had to make a decision to push ahead in search of a creek so most of the day you’ll find me leaving Michael behind and I would ride forward to see if the creeks are having running water and I’ll wait there for him and that started to have a psychological effect on him as well,” he said.

He said they were warmly welcomed by residents of Lethem who escorted them by motorcade around the southern Guyanese town. “When I got there, it was amazing and I’m looking and I’m thinking  this is way more than what we accomplished. What we did was nothing in comparison to what they would have done for us because to know that you just chose to ride for the sake of riding and there are persons at the finish line who saw that as something being meaningful or something with merit; it is overwhelming,” said.

2021-11-03
Denis Chabrol
Previous: Georgetown Chamber proposes only to bridge govt-opposition divide on COVID vaccination
Next: Two employees arrested for killing of medical doctor in his clinic