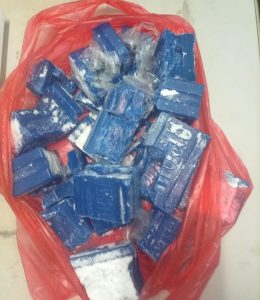 Marijuana among bars of blue soap.

A 20-year old woman has been arrested in connection with her alleged efforts to smuggle 22 grammes of marijuana among several bars of blue soap into the Lusignan Prison, East Coast Demerara, police said.

The woman of Cummings Park, Sophia was arrested Monday afternoon at the prison where she had gone to take items for an inmate.

Police said that on arrival, her bag was searched and a quantity of blue soap was seen.  “Upon examination of the soap, eight plastic parcels with of leaves, seeds and stems suspected to be cannabis were found,” police said.

The suspect was reportedly told of the allegation, cautioned and arrested before being escorted along with the suspected narcotics to the Vigilance Police Station.