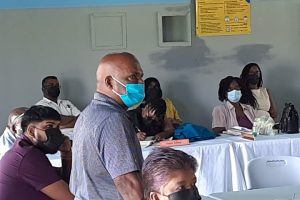 The Region Four (Demerara-Mahaica) Council meeting was Thursday morning adjourned after an Alliance For Change (AFC) councilor, who wants to sponsor a no-confidence motion against the Vice Chairman Samuel Sandy, refused to leave on the grounds that he was exposed to a COVID-19 positive person.

Regional Chairman, Daniel Seeram said when the council meets again next month he would be reprimanding Councillor Amarnauth Chinkan for his behaviour on Wednesday when he was told to leave the Council. “I will not leave because you never tell me that I cannot attend…. You never send me anything official. You are sending message to me,”  Mr. Chinkan said.

“Councillor you are asked to leave these proceedings. I will not entertain any conversation with you at this point in time on it. I believe that this is a matter of public health and  you are doing a disservice to your fellow councillors by being here at this meeting after it had been communicated to you,” Mr. Seeram told  Mr. Chinkan.

After Mr. Chinkan was informed that he would have to leave, he vented his frustration aloud during a cross-talk with the Chairman.  “You would like to adjourn this meeting because you know your time short,” he said. 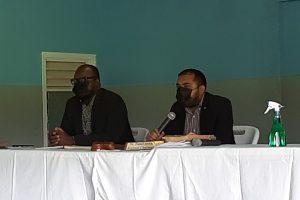 The Regional Chairman noted that Regional Executive Officer Donald Gajraj and two People’s Progressive Party Civic (PPPC) Councillors stayed away from the council meeting because they were told that they were in contact with a COVID-19 positive person and should get tested.

Mr. Chinkan insisted that he was tested negative twice- once last week and again on Thursday. However, he did not provide any proof of his test result. When pressed by the media about why he did not present his negative test result, he brushed off questions, but opted to label the Regional Chairman a “bully” and asserting that “I am not leaving unless he leaves.”

Regarding the no-confidence motion against the Chairman and the Vice Chairman, the Regional Chairman said he was relying on the law, precedent against the then Region Four Chairman Clement Corlette and parliamentary procedure to remove the motion from the agenda.  Mr. Seeram said the motion, submitted on 21st November 2021, was examined and  “dismissed” by him because it was “frivolous, ill-written and have no legal bearing.”

“After going through the motion and at our examination my findings were clear and I dismissed such a motion,” Mr. Seeram said. “This is not a circus here. This is the Regional Democratic Council (Demerara-Mahaica) and I wouldn’t have such issues being raised in the Council  when we have issues pertaining to public importance to deal with,” he added.

But Mr. Chinkan said the Regional Chairman could not unilaterally throw out the motion but it is the Council that has to do so. “This is three months he has this motion and they are dancing around it and they are giving you all frivolous reasons why the motion should not be read,” he said. He added that the Chairman and the Vice Chairman must be removed for incompetence.

Alliance For Change (AFC) Councillor Neilsen Mc Kenzie said he was now looking forward to the next council meeting because “ultimately we want to move the council forward; it is the business of the people that matters more than the individual persuasions.

The AFC has already publicly criticised APNU for breaking a formal agreement that the AFC would have be supported for the position of Vice Chairman. However, when it had last year actually gone to a vote the APNU nominated  Messrs. Seeram and Sandy for both the Chairmanship and Vice Chairmanship.