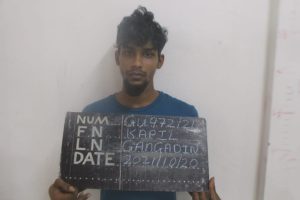 Members of the Joint Services have launched a manhunt for Kapildeo Gangadin, a double-murder accused, who managed to escape from the Lusignan Prison Thursday morning, the Guyana Prison Service said.

In a statement, Director of Prisons Nicklon Elliot confirmed the escape took place sometime around 04:05am, after a routine check was conducted. 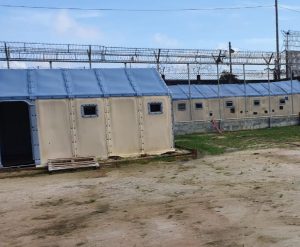 A section of the quarantine facility at the Lusignan Prison.

The Prison Service said that Gangadin was housed in the Quarantine section of the Prison.

“From initial investigations, Gangadin had tampered with the housing unit. Upon gaining entry from the housing unit, he ventured to the back of the prison where he used a cloth-pole to scale the fence.

He proceeded into the farms where he scaled the gate and made good his escape into the dumpsite,” the Prison Service said.

Immediately a joint patrol was established at the outer perimeter of the prison, according to the Prison Service, and a search has been launch by the Joint Services to recapture the escape.

The Prison Service is warning persons that aiding and abetting the escape is a criminal offence.

Anyone knowing the whereabouts of the escape should contact the nearest Police station or call 911.