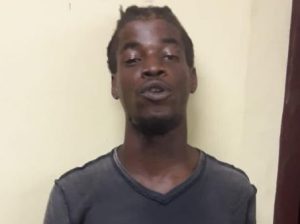 A man, who was fined $12.5 million and sentenced to five years imprisonment for being in possession of more than 20 kilogrammes of marijuana, three years ago has been caught, police said.

Police say 25-year old Ricardo Welch of Fort Ordinance, East Canje Berbice, was caught by police while he was pushing a cycle in New Amsterdam.

He was nabbed at about 1 PM Monday in the Princess Elizabeth area. He was expected to be taken to the New Amsterdam Prison.

Investigators say Welch was searched but nothing illegal was found, but he was taken to the New Amsterdam Police Station where he gave his name and address.

Police say they checked the station records and two conviction warrants from Region Five (Mahaica-West Berbice) were found in his name.

One of them was for five years imprisonment and the other for a $12.5 million fine.

Records show that both warrants stemmed from being in possession of more than 20 kilogrammes of marijuana for the purpose of trafficking on March 28, 2018 at Weldaad Back Street, West Coast Berbice.

Welch had been granted bail and was subsequently found guilty in his absence on July 31, 2018.