Three executive members of the People’s National Congress Reform (PNCR) have blistered their party leader, David Granger, after he asked that they and others be blocked from managing the upcoming elections for leader because they had allegedly pushed for no-confidence motions against him.

Leader aspirants Aubrey Norton and Dr Richard Vanwest Charles as well as Winston Felix have all denied fueling the no-confidence motions against Mr. Granger, but they blamed him squarely for the lack of confidence that members have in him. 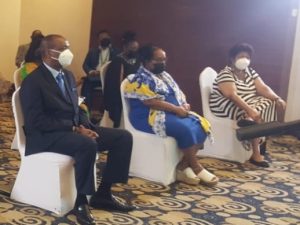 Joseph Harmon (left) and Amna Ally (right) seated at the launch of his campaign for the leadership of the People’s National Congress Reform (PNCR).

Already, top party officials are questioning on what basis the PNCR Leader could be concerned about bias when the party’s General Secretary Amna Ally as well Vice Chairman Annette Ferguson who are members of the Congress Committee were present at Joseph Harmon’s campaign launch.  Ms. Ally was not among those who had spoken at that event, but Ms. Ferguson said she was backing Mr. Harmon because he is  a “hardworking, dedicated committed” person who has given “selflessly to this great party.”

Already, according to a letter dated October 19, 2021, Dr. Vanwest Charles stopped short of telling the PNCR Leader that Ms. Ally should not be part of the electoral process. “I hereby advise you, in the interest of transparency, credibility, impartiality and membership confidence, that your General Secretary desist from any electoral practice inimical to the culture of democracy within the PNCR.  Such is within the best interest of all parties involved,” said Dr. Vanwest Charles, the son-in-law of late PNC Founder-Leader Forbes Burnham.

The PNCR executive member said he, as well as he believed Ms. Lawrence, Messrs. Norton and Felix, would not be part of the accreditation or electoral process.

In correspondence seen by News-Talk Radio Guyana 103.1 FM/ Demerara Waves Online News, Mr. Norton clearly stated to Mr. Granger that “I did not vote on any no confidence motion” against him and the General Secretary. That aspiring leader, however, told Mr. Granger that attendees at meetings believed that he deserted them. “May I state that it is true that I was in meetings in which members of our party expressed no confidence in your leadership and that of the General Secretary. They also stated that you abandoned them, inter alia, and therefore they cannot repose confidence in you,” said Mr. Norton.

Mr. Felix, who served as Minister of Citizenship and Immigration in the Granger-led administration from 2015 to 2020, has also written to the PNCR Leader describing his statements contained in an October  18, 2-21 email to the PNCR Chairman Volda Lawrence  as “inaccurate and grotesque”. Mr. Felix admitted that Central Executive Committee members had visited the Georgetown District and Regions Nos. 4, 5 and 10 but denied that the aim had been to pass no-confidence motions. He said “our mission was to take our issues” relating to the state of the PNCR in light of recent experiences with the Leader who had failed to comply with constitutional governance that requires collective decision-making. Mr. Felix specifically pointed to Mr. Granger’s alleged failure to inform the Central Executive about his intention to include the Tabitha Sarabo-Halley-formed Guyana Nation Builders Movement and the Equal Rights and Justice Party led by Jaipaul Sharma into the fold of A Partnership for National Unity (APNU). Further Mr. Felix scolded the PNCR Leader for announcing the two parties inclusion in APNU although the Central  Executive had decided to defer discussion on that to another meeting.  “You agreed, but to our consternation you boldly went about announcing the admission of  the two Parties.  Talk about Leader dominance.  It was thrown into our faces!!!!!!!!  This was offensive to us and therein lies the birth of the visits by members of the CEC.  I repeat, it was our intention  to take to our members the state of our beloved Party bearing in mind your previous acts of disrespect shown to us,” said Mr. Felix.

He denied that any of the Central Executive Committee members had anything to do with  no-confidence motions, but said they had always been moved and seconded by party members from the floor. “I could detect widespread dissatisfaction among our members of your leadership.  They vented openly that the campaigned for Granger who did not fight for them.   What a pity!!!!!!  That is what you have to deal with as the no-confidence motions seemed to have been born out of that dissatisfaction and not from the Central Executive members.

You have accused us of displaying our preferences, prejudice and partiality, for whom may I ask? You have wrongfully accused us of these actions when the only action we took was to take to our members the ‘state of the Party’ intending eventually to secure Constitutional adherence by all,” he said.

The PNCR Leader, in his correspondence to Chairman Lawrence, urged her and other Central Executive Committee members to await the convening of Congress at which delegates could “vote freely” for a candidate of their choice and desist from holding meeting and issuing press statements which have “damaged the reputation of the party.” He has specifically asked Ms. Lawrence to block those who have been part of the campaign of no-confidence motions from being part of the internal party electoral process. “I ask you, as Chairman, and in order to ensure the integrity, credibility and validity of Congress, to call on CEC (Central Executive Committee) to disqualify such persons from managing any aspect of the forthcoming Congress which concerns the election of the party leader, officers and members of the CEC,” he said.

The PNCR is expected to hold its long-awaited Congress on December 11, 2021 through a mixed system of face-to-face and virtual linkups across the country and the Diaspora. For the first time, due to the COVID-19 pandemic voting for the Leader, Chairman, Vice Chairmen and 15 Central Executive Members would not be done centrally by delegates at Congress Place.