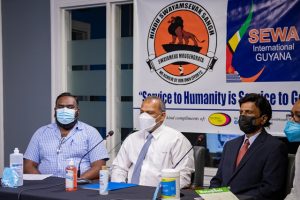 The Infectious Disease ‘COVID’ Hospital at Liliendaal, Greater Georgetown will soon be able to produce its own oxygen and save the the national treasury millions of dollars it currently spends on buying supplies from a private company, officials said Monday.

During a virtual press conference, Minister of Health, Dr. Frank Anthony said purchasing of oxygen for the hospital’s Intensive Care Unit (ICU) has been costly, and noted that the independent source of oxygen will substantially decrease the level of expense.

“As you know the COVID-19 hospital at Liliendaal, we have close to 200 beds and we have been buying oxygen for that facility. Our ICU set up there, we have moved it from about eight beds to now about 52 beds and therefore providing constantly, the amount of oxygen is a very expensive exercise… Once that is up and running, it would substantially decrease the cost that we’ll have at the COVID hospital to provide oxygen,” the minister said.

The oxygen generating plant has been donated by the Hindu Swayamsevak Sangh (HSS) and Sewa Guyana. The plant is yet to arrive in Guyana, and when it does personnel would be trained.

HSS Coordinator,  Ravi Dev stated that discussions to source the oxygen plant commenced a few months ago with Dr. Anthony.

“Sewa international, flying thousands of generating plants to India and he (the Health Minister) asked me whether we could source one of those because looking ahead, he felt and he was proven right, unfortunately he felt that we would have our surge sooner rather than later. So, I said of course we will try, so I got in touch with the individuals both in the US and in the UK … and they went ahead and sourced it,” Mr. Dev related.

The oxygen plant, which was sourced from India, will be flown into Guyana as soon as the logistics are sorted.

He explained that the plant is designed to concentrate the oxygen at a scale with the output typically varying from two normal meter cube to about 200-meter cube per hour. He said the plant that has been purchased for Guyana would produce 800 liters per minute, adding that at 16 liters per minute 50 patients at any one time could be supplied with oxygen  from the plant.

The oxygen plant will be functioning 24/7 to facilitate patients at the hospital.

An engineer from India will also be commissioning the plant before training persons to operate the machine.