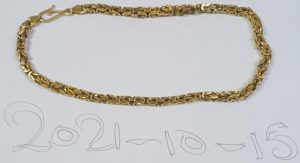 The jewellery that police said was found in possession of the suspect.

“Acting on information, a mobile police patrol arrested the suspect and the jewelry was found in his possession,” police said. Police said the 24-year old admitted to committing the offences.

“The suspect confessed to the allegations put to him and remains in custody pending further investigations and charges,” the civilian law enforcement agency added.

The Guyana Police Force, in a statement, said that at about 4:30 Friday afternoon, 21-year old Ganesh Persaud was stabbed to the neck by a man who robbed him of cash and jewellery.