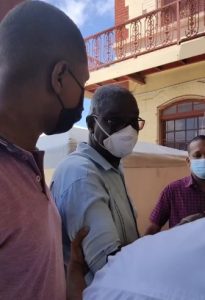 A policeman restraining retired Assistant Commissioner of Police Paul Slowe in the compound of the Georgetown Magistrates’ Court. (Screen-grab from Royston Drakes Productions)

Retired Assistant Police Commissioner Paul Slowe was Friday placed on $100,000 bail on a charge of conspiracy to defraud the Guyana Police Force of $10 million and $75,000 bail for three sexual offence charges.

The cases have been adjourned to 26th November, 2021 for the continuation of those matters.

Mr. Slowe confirmed this moments after exiting the Georgetown Magistrates’ Court,  months after he and  ex colleague Retired Assistant Commissioner Clinton Conway as well as other serving and former members of the police force had been arraigned on the fraud charge.

The prosecution’s case was that they had been paid for the review of the Guyana Police Force’s Standing Orders, although that task had been already completed.

Mr.  Slowe has also been charged with three sexual assault offences under the Sexual Offences Act, based on complaints made by a female police officer. He has publicly vehemently denied committing such acts.

The others appeared in court in May, 2021 but Mr. Slowe did not because he was overseas on travel duty. “When the matter came up at some stage, I was never questioned, nothing was ever put to me, I was never arrested so they had no grounds,” he said. He recalled that last Friday, a summons was sent to Attorney-at-Law Nigel Hughes for him to appear in court on Friday so he returned to Guyana on Wednesday.

Mr. Slowe and his lawyer, Selwyn Pieters expressed concern that the police physically held on to the Retired Assistant Police Commissioner, telling him that he was under arrest in the Georgetown Magistrates’ Court compound. “I’m confronted by these officers for a matter that is already before the court… so I told them plain that that is not the procedure,” he said.

Mr. Pieters said the officer’s action “constituted an assault” and the conduct amounted to an abuse of process.  Mr. Slowe said the police officers had no authority to arrest him to caution him about the charges because the matters are already before the court. He said it appeared that  the police were acting on instructions from their “political bosses.”  The Retired Assistant Commissioner said Mr. Ramannah only produced his identification card when he questioned his identity.

At that juncture, Mr. Slowe bluntly refused to be taken to the police enquiries office unless he was advised by his lawyer. “I’m not going to the enquiries office because if I go, you have properly arrested me,” adding that “I don’t accept you reason” for arresting him.

Attorney-at-Law Patrice Henry implored the detectives to display some amount decorum. They allowed him to go the court room eventually to be arraigned.

One of the detectives who did not properly identify himself sought to identify his colleague from the Special Organised Crime Unit but Mr. Slowe objected saying that neither policemen, clad in plainclothes had identified themselves.