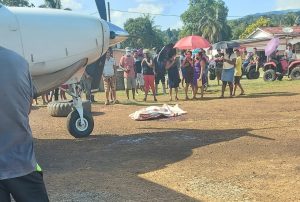 A man walked into an Air Services Limited (ASL) plane’s propeller on the Kamarang Airstrip Friday afternoon before he was due to offload cargo, sources said.

He has been identified as Nigel Rodrigues of Waramadong. He is not an employee of the airline, but was there to offload cargo for someone. The plane bears registration markings 8R-GFA

Sources said the incident occurred shortly before 3 PM. The source said that instead of walking around at the rear of the plane, the man approached the plane from the front shortly after it arrived.

From all accounts, the pilot could not have seen the man because the plane was tilted slightly upwards.

Police were up to late Friday still investigating while the body remained at the scene of the incident. The pilot is in custody.

2021-10-15
Denis Chabrol
Previous: OPINION: Aubrey Norton has what it takes for PNC leader; beyond that, the waters get muddy
Next: Retired Assistant Police Commissioner resists arrest on procedural grounds; granted bail on fraud, sexual assault charges