No place for confrontation, time for unification- PNCR’s Volda Lawrence 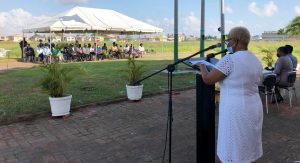 PNCR Chairman Volda Lawrence addressing a flag raising ceremony at Congress Place to mark the 64th anniversary of her party.

Chairman of the People’s National Congress Reform (PNCR), Volda Lawrence on Tuesday issued a stirring appeal for unity at a flag raising ceremony to mark her party’s 64th anniversary.

“I wish to affirm today it is clear that political confrontation would lead us nowhere. Our actions must be set towards unification,” she said twice to small gathering of executive members, and former and current top party officials.

It is unclear whether she was referring to relations with the governing People’s Progressive Party (PPP) or internal wrangling among party members who are backing incumbent party leader David Granger and Opposition Leader Joseph Harmon on the one hand, and those who are endorsing Leader hopefuls Aubrey Norton, and Dr Richard Vanwest Charles.

She added that as a Party, unified in purpose, “we will continue to defend and promote the great principles of our Party, which are centered on social justice.”

PNCR Leader David Granger, who said he is on leave of absence, did not attend the flag-raising ceremony that was held at the party’s Congress Place headquarters, Sophia, also quoted extensively from the PNC’s late Founder-Leader Forbes Burnham to emphasise that there is no room for “factionalism”.

Against the backdrop of still lingering concerns that a number of top party officials had been excluded from serving again as parliamentarians, Mr. Granger said that after the 1973 general elections, the PNC had changed its parliamentarians. “The new cohort of Parliamentarians has been elected to consolidate the Party’s massive popular support by intensifying the effort to realise the objective of providing a good life for everyone during the coming Decade of Development,” said Mr. Granger who is the Representative of the List of candidates for the PNCR-led coalition of A Partnership for National Unity+Alliance For Change (APNU+AFC).

The PNCR Chairman also cited the need to “proceed in a way that will enable everyone to benefit – at least this should be our goal.”

Ms. Lawrence charged the party to tell its own story rather in the face of those who “attempt to create an illusion of who we are and what we stand for. As the PNCR prepares to hold its long-awaited Congress to elect a leader, Vice Chairmen and a 15-member executive, she said “it is through our adherence to Our Constitution, to dynamic and strong leadership that our membership will remain committed and have hope for a prosperous future.

She appealed to party members to expand the PNCR’s reach and allow its principles and commitment to the people of Guyana to dominate the political realm and improve the lives of all Guyanese. “From this historical starting point, our personal commitment as well as our responsibility to all of Guyana must include working to have a more organised and mobilised Party, united in its effort to advocate for its membership and all Guyanese,” said Ms. Lawrence who is performing the functions of Leader.