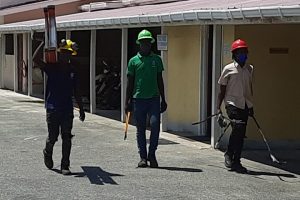 Firefighters leaving with the burnt cables that led to the building that houses the Ministry of Local Government and Regional Development and Police/Public Service Commission.

A minor fire of electrical origin was Tuesday afternoon brought under control at the Ministry of Local Government and Regional Development building on Fort Street, Kingston.

When  reporters turned up on the scene, no smoke or fire was seen. Sources said firefighters responded to a call after workers smelled something burning.

At least three fire tenders, an ambulance and police responded to the emergency call.

Following the devastating fire at the Brickdam Police Station, firefighters on Monday responded to calls at the National Insurance Scheme and the Guyana Post Office Corporation headquarters.