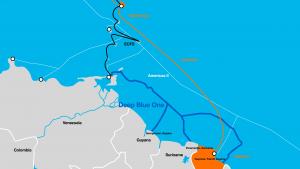 Digicel on Wednesday announced that it  has inked a deal with the France-based major international telecoms provider, Orange, to build a submarine fibre-optic cable that would link French Guiana, Suriname, Guyana and,  Trinidad and Tobago and provide service to the rapidly emerging oil sector.

“Recognising the opportunity to supercharge connectivity in this area of the Caribbean and Latin America, Deep Blue One will provide best in class connectivity to French Guiana, Suriname, Guyana and Trinidad & Tobago, with the opportunity to connect offshore oil and gas rigs on the back of the industry boom in the region,” Digicel said.

Digicel explained that The 2,000 km cable installation for Deep Blue One has five branching units, plus the capability to provide connectivity for offshore rigs, with anywhere from two to eight fibre pairs in each segment, offering a minimum of 12Tbit/s capacity, per fibre pair.

Importantly, the cable is routed to be able to connect the many offshore oil and gas rigs and the build will include new cable landings in Trinidad, Tobago – with a new route between Trinidad and Tobago – and Suriname. With cable installation beginning in mid-2023, the project is expected to complete in early 2024.

Digicel said this build will complement Digicel’s existing Southern Caribbean Fiber network which has approximately 3,000 km of submarine cable connecting 20 islands in the Eastern Caribbean, running from Trinidad & Tobago up to Puerto Rico with onward connectivity to Miami and New York.

As a major player in the submarine cable industry, with investments in over 40 cables worldwide, Digicel says  Orange will rely on its expertise to act as landing party in Cayenne for the French Guiana branch and to operate the cable landing station on behalf of Digicel while its subsidiary, Orange Marine, will be in charge of laying the cable.

“With subsea fibre providing the backbone of the global economy and serving as a catalyst to economic development, our substantial investment in submarine capacity underpins our confidence in the development of the region. A great example of this is the connectivity options we will be able to provide, both onshore and offshore, to the oil and gas industries in countries like Guyana and Suriname as they capitalise on the boom in the region,” Digicel’s Oliver Coughlan, Digicel Group Chief Executive Officer, was quoted as saying.

Peter Hobbs, Group Director International and Wholesale Business at Digicel Group, added: “As a Digital Operator serving over 13 million customers in 32 countries globally, we’re focused on driving economic opportunities for our customers. This is an exciting next phase for us – it’s about delivering quality, reliability, performance – and importantly, opportunity. We’re excited to get going on this.”

Beyond connectivity, this cable system will bring a full economical ecosystem for the benefit of all. Indeed, in a 2019 report published by the International Telecommunication Union (ITU), entitled “The economic contribution of broadband, digitisation and ICT regulation: Econometric modelling for the Americas”, it was suggested that an increase of 10% in fixed broadband penetration would result in an increase in 1.9% in GDP per capita.

As a Digital Operator, Digicel is in the business of delivering powerful digital experiences 1440 minutes of each day to customers – that’s every minute, all day, every day.

Serving consumer and business customers in 32 markets in the Caribbean, Central America and Pacific, its investments of over US$7 billion and a commitment to its communities through its Digicel Foundations in Haiti, Jamaica, Papua New Guinea and Trinidad & Tobago have contributed to positive outcomes for over 3 million people to date.

Orange is one of the world’s leading telecommunications operators with sales of 42.3 billion euros in 2020 and 139,000 employees worldwide at 30 June 2021, including 80,000 employees in France. The Group has a total customer base of 263 million customers worldwide at 30 June 2021, including 218 million mobile customers and 22 million fixed broadband customers. The Group is present in 26 countries. Orange is also a leading provider of global IT and telecommunication services to multinational companies under the brand Orange Business Services. In December 2019, the Group presented its new “Engage 2025” strategic plan, which, guided by social and environmental accountability, aims to reinvent its operator model. While accelerating in growth areas and placing data and AI at the heart of its innovation model, the Group will be an attractive and responsible employer, adapted to emerging professions.