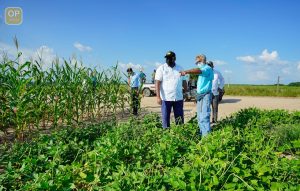 President Ali also pointed out that the project will give the Government the chance to diversify the Guyana Sugar Corporation (GUYSUCO).

“We are already discussing how we can expand this partnership and one of the things that we have always talked about in GUYSUCO is to have diversification, and we are now discussing with the group how we can use one field in the next phase of the trial to do the same thing that we have done here,” he said while on a tour of the 115-acre soya bean and five-acre corn pilot projects in Ebini, Upper Berbice River.

That project is being spearheaded  by a consortium of investors including Guyana Stock Feed Limited, Royal Chicken, Edun’s Poultry Farms and Hatchery, SBM Wood, Dubulay Ranch, Bounty Farm Limited and a Brazilian stakeholder.

The President hopes that the replicated pilot on a sugarcane field would provide an opportunity to examine cost and operational efficiencies and profitability.

Dr. Ali said that lands in the various estates would be examined and tested to see which can be viable to replicate the project and further diversify the sugar company.

Dating back to the 1980s and early 1990s, the then Desmond Hoyte-led administration had first examined the possibility of diversifying GUYSUCO’s operations into other areas of agriculture.

Talk of diversifying the Sugar Corporation comes at a time when the industry has to be heavily subsidised as the incumbent People’s Progressive Party (PPP) struggles to keep its electoral promise to reopen the several sugar estates that had been closed by the David Granger-led administration because the industry has been a drain on the coffers.

Expressing satisfaction so far with the corn and soya bean project, which has been facilitated in large measure by the Guyana government, the President said more land would be made available. He hinted that lands that had been leased for agricultural purposes but had not been efficiently used would be taken back by the State and reallocated. “We have to get up to 75,000 acres for us to move to full production locally in this area. So in the coming weeks, we will be looking at how we can find that land that meets the soil requirements and the scientific requirements to achieve the target,” he said.

Mr. David Fernandes of Bounty Farm praised the Guyana government for the initiative whose aim is to drastically reduce the cost of poultry feed and save the country millions of US dollars annually.

Mr. Fernandes related that in his years in the private sector he has never experienced such consistent Government support in a project.

“We are not very far away from reaping, we could probably start reaping this in about three weeks and then we will know exactly what the productivity looks like. We already know what the costs are up to this point, so it is interesting and I think that with the push the Government has given us, we will go on to the next stage of doing 2500 acres and then beyond that, it will be a level of acceleration that will probably be interesting to see,” he said.