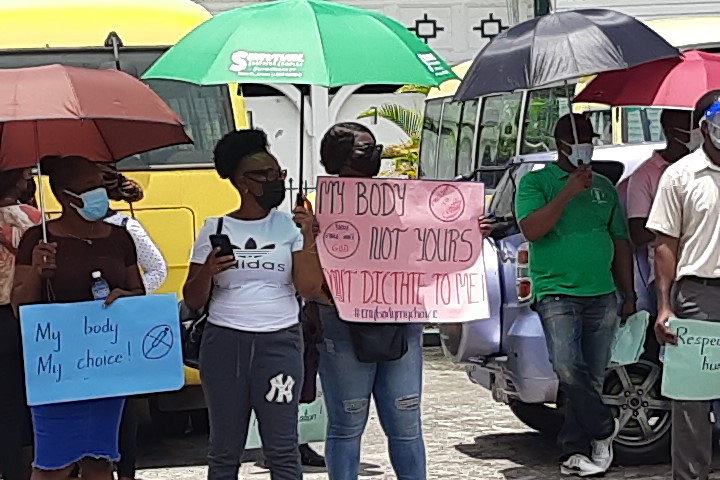 The Guyana Teachers’ Union is rejecting claims by the Ministry of Education that scholarships or concessions for educators will be in jeopardy if they refuse to join in protests against the COVID measures.

A number of teachers last week protested outside the Ministry of Education for three days against the need for teachers to be vaccinated or present weekly PCR tests.  The union is also demanding that the Education Ministry settles all outstanding financial matters before the teachers return to the classrooms.

The Ministry of Education has since accused the GTU executive of threatening teachers that their scholarships and promise of duty-free concessions will be in jeopardy if they do not participate in the strike.

The President of the GTU, Mark Lyte Sunday night told a virtual meeting that that is not true. “We are saying that this is a lie. The union has not done any such. As a matter of fact, this union has never threatened to take away benefits from teachers. In fact, all that we have done and continue to do is to fight for benefits,” he said.

The Education Ministry has sought to assure teachers who do not want to participate in strike action that “they cannot and will not be punished and that the Ministry will guarantee their protection.”

Meanwhile, the GTU says so far it has not heard anything from the Ministry of Education in addressing concerns about the vaccination requirements and outstanding money matters. Education Minister Priya Manickchand, who has previously castigated GTU General Secretary Coretta Mc Donald and others for hijacking the GTU as a political tool, said no talks were planned for Tuesday with the union and that the Ministry was monitoring the overall school system including the prevalence rate of the coronavirus in the school system since face-to-face in-person learning began on September 6 for the first time since March 2020 when the virus was first detected in Guyana.

Mr. Lyte says teachers will not be protesting on Monday and are being asked to go to school and report to the union about whether they are being locked out.  During the virtual meeting with teachers, he said union executives would be locked in strategy talks all day Monday to plan for more protests on Tuesday.

GTU General Secretary says if the Ministry of Education lifts the measures that call for teachers to be either vaccinated or produce weekly PCR tests as well as work out a payment plan, the union will call off the strike.

The union officials say that the turnout during last week’s three-day strike was poor. Ms. Mc Donald says it is clear that politics has impacted on the response to the strike call. “we could not get all of our colleagues to join us because we know that in some areas they are highly politicised and we know the kind of threats and the kind of arm that could be meted out to some of our members so let’s understand and respect that. We know that in some areas, our teachers are going to come out and shut the entire place down and we respect that and we applaud them for that,” said the GTU topper who is also an opposition lawmaker.

The GTU President said while the Region 2 ‘Action Group’ had successfully mobilised teachers there, the elected union officials virtually abandoned their colleagues. “In Region Two, some of the Branch officials were not taking an active stand. All of a sudden, they become political; all of a sudden and I’m disappointed but I have learnt from this experience. We must be able to call a spade a spade. This is not anything personal with any political party or individual. This is about our teachers, this is about our educators who are being unfairly treated,” he said.

Region 2 is a stronghold of the governing People’s Progressive Party (PPP) while many other places in Region Four (Demerara-Mahaica), including Georgetown, and Region 10 (Upper Demerara-Upper Berbice) are major support bases of the People’s National Congress Reform-led A Partnership for National Unity.

Three  years ago, while the PPP had been in opposition it had backed a strike call by the GTU, causing many teachers in its strongholds especially in Region 2 and Region Six (East Berbice-Corentyne) to stay away from  schools.

With the now opposition APNU endorsing the teachers’ protest, PNCR Executive member Aubrey Norton, who was on the picket line last week, defended his political organisations’ involvement in the industrial action. “Why is it in 2018 when the same Teachers’ Union protested against the APNU against the government, it wasn’t considered to be political but now that they are protesting against the PPP, it is considered to be political? To me on both occasions, the teachers had grouses, they were fighting for their grouses and it’s a right for them to fight.

I don’t see it as political. However, as a political party, just like the PPP did in 2018, we are in solidarity with the teachers because we believe their cause is just and we will support them; that’s the reality,” said Mr. Norton, a Political Science and contender for the PNCR’s leadership at the Congress that is likely to be held in November.

Mr. Norton said the PNCR/APNU was “using its political capital” to get justice.