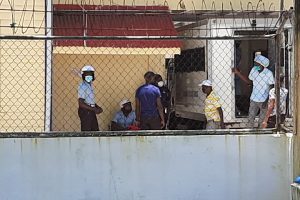 Executive member of the People’s National Congress Reform (PNCR) Aubrey Norton and at least 17 others were Monday morning arrested.

He and  16 others were taken to the Brickdam Police Station during the course of the morning and early afternoon in a bus and detention van.

Mr. Norton said, “I don’t know why they arrested me. I was on Regent Street. The procession was coming on Vlissengen Road and the police they came and just arrested me.

He said eight other persons were arrested previously and he was placed in the same bus and taken to the Brickdam Police Station.

Mr. Norton said police have not given him a reason for the arrest, only saying that they had to await the arrival of the Commander.

Several supporters gathered outside the Brickdam Police Station in solidarity with those arrested. Two vehicles arrived with several persons and then departed again.

Monday’s arrest coincides with a call to shut down Georgetown-Guyana’s commercial and administrative capital- to protest vaccination measures and other concerns.

About three weeks ago, Working People’s Alliance member Kidackie Amsterd and other persons were arrested under similar circumstances.

They were subsequently charged and released on bail.