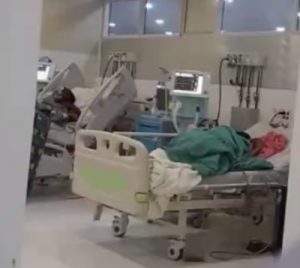 Patients at the COVID ward at the Infectious Disease Hospital, Liliendaal.

Fifty-six year old Nurse Vanessa Maynard died on Thursday. September 9, 2021 after she had been taken to the Georgetown Public Hospital on August 29 at around 1 AM and then moved to the COVID hospital at about 10 PM on the same date.

Her relatives told a news conference, organised by A Partnership for National Unity+Alliance For Change (APNU+AFC), that they would not state whether Nurse Maynard was vaccinated because the question was not relevant.

Minister of Health Dr. Frank Anthony could not immediately respond to criticisms because he had not heard the news conference. However, spokeswoman for the Georgetown Public Hospital, Chelauna Providence rejected claims by the relatives that Nurse Maynard had told them that four nurses had been managing 64 patients at the COVID Hospital.

“At no point in time were there only 4 nurses in the facility. On the day that the vaccination requirements were implemented the facility had a complement of 8 nurses on shift with 19 patients in the ICU (Intensive Care Unit),” she said. Ms. Providence said she could not comment on the specific case of Ms. Maynard.

Ms. Providence reiterated that the 4:64 ratio  is certainly not reflective of the situation at the facility. “With the increase in admissions over the past few days, we’ve had in excess of 20 nurses working per shift daily. As of yesterday, 18 additional nurses have been reassigned to the ocean view facility to assist with the management of patients. This is in addition to 9 additional doctors who have joined the current complement of 13 doctors who work per shift,” she told the media. 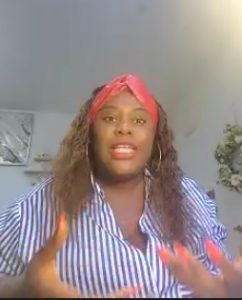 Nurse Maynard’s daughter, Keneisha Carryl, says her mother was a diabetic who had a foot ulcer that was not properly managed.  “When she was transferred, they did not look at it the next day either. She called us. She told us she had to cry and she told them ‘I’m a nurse, just bring the gauze, bring the iodine, I’ll do it myself’ because she opened the bandage and she saw that it was green. It had become infected,” Ms. Carryl told the news conference.

The relatives also complained that Ms. Maynard given foods with high sugar content at the COVID hospital, despite her diabetic condition.

Another relative, who preferred only to be called Kizzy M, said that at one time her mother had been prepared to be sent  to Mercy Hospital for CT. However, Kizzy M says her aunt had been left in the yard for several hours on both days. Kizzy M said that on the third day Nurse Maynard could not have been taken for the CT scan because there had been insufficient oxygen. Kizzy M told a news conference that her aunt had said that she had bribed nurses at the COVID hospital to warm her food and take her to the bathroom.

She said that her mother was dehydrated because she had decided not to drink a lot of water because no one had been taking away the urine and feces. “There were several instances where her urine was concentrated because the nurses were not coming on a regular basis to change the bed pans, nor were they emptying the colostomy bags for my aunt or any of the other patients there. My aunt specifically was afraid to drink water to be hydrated because, again, she was afraid that nobody was going to come and empty the bed pans. They were not pushing fluids either so that led to her being dehydrated as well,” Kizzy M said.

Kizzy M says Nurse Maynard had informed them  that at the time 64 patients had been hospitalised with four nurses.

However, Shadow Health Minister Dr. Karen Cummings says the accepted ratio in such a critical care institution is 1 nurse to 4 patients.

The relatives said Nurse Maynard might have been first exposed to the COVID virus at a private hospital on August 25 where she had previously had her ulcer dressed.  She had been reportedly told that the place was being fumigated because the nurses that had been doing the dressing had been tested positive for COVID.

She says no treatment or oxygen had been given until August 26, although she had spent from 1 AM to 10 PM the day before.

Shadow Attorney General, Roysdale Forde told the news conference that, based on the accounts by Nurse Maynard’s relatives, the COVID Hospital is “nothing more than a hell-hole.” “The revelations are disturbing, they are horrendous. They are indicative of the collapse of the entire healthcare system in this country,” he said, adding that the President, Health Minister and the entire government are responsible for Nurse Maynard’s death.

APNU+AFC reiterated its call for it to be included in the COVID-19 national task force with experts.

The Georgetown Public Hospital spokeswoman said work was continuing to further expand the ICU facility to accommodate the influx of patients. She explained that recently the ICU was expanded to cater for an additional 10 patients, taking it from 28-38 beds and work is currently ongoing to expand further.