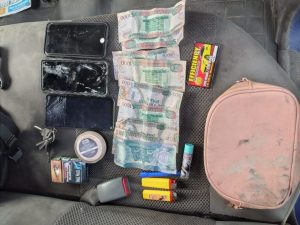 A 15-year old boy and a 23-year old man, who allegedly robbed several persons near the Demerara Harbour Bridge earlier Wednesday morning, were arrested in Costello Housing Scheme and Albouystown with cash and other items suspected to have been been stolen, police said.

A motorcycle believed to have been used in committing the robbery was detained by police.

Police said the 15-year old boy was arrested at Costello Housing Scheme, Georgetown and the 23-year old  man was caught in a watery dug-out in James Street, Albouystown, Georgetown.

The Guyana Police Force said its surveillance cameras captured the robbery in progress and immediately deployed patrols. “Earlier this morning the command centre, by way of CCTV, captured four motorcycles – all with riders and pillion riders – committing armed robberies at the eastern side of the Demerara Harbour Bridge.  The perpetrators then headed to Georgetown. As a result anti-crime patrols in Division 4A were immediately alerted and intercepted two of the suspects with one of the motorcycles,” police said.

Persons are asked to visit the Brickdam Police Station and identify their belongings.