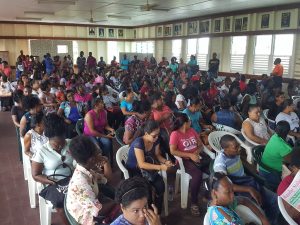 A section of the teachers who attended a meeting with GTU executives at the union’s headquarters on Woolford Avenue, Georgetown. (FILE PICTURE)

The Guyana Teachers Union (GTU) Tuesday night issued a call for its members to go on a three-day strike from Wednesday to protest the lockout or removal of teachers from schools because they are not vaccinated or do not have a negative COVID test.

The Ministry advised teachers, parents and administrators not to get caught up in political action being spearheaded by Ms. Mc Donald.  “The Ministry of Education is adamant that there is no grievance/basis for strike action and urges all teachers, parents, and administrators not to fall prey to the political machinations of Coretta McDonald and the small cabal of self-serving individuals who have hijacked the Guyana Teachers Union.

The Ministry calls upon the teachers of this country to reject the unconscionable call of the GTU, Coretta McDonald, and her political cohorts in favor of serving the children of our nation and advancing their education and socialization as we exit this pandemic and reclaim our lives,” the Education Ministry said.

But already, at a virtual meeting with teachers last night, the GTU General Secretary said there is no political motive. “This fight is not about politicians and which political party is there and which political party is not there. This fight is about you and I and what will happen to our children,” said Ms. Mc Donald, a parliamentarian for the opposition A Partnership for National Unity+Alliance For Change (APNU+AFC).

The Opposition Leader’s Office early Wednesday morning endorsed the GTU’s strike call. “The Opposition Coalition stands in resolute solidarity with the nation’s precious and indispensable teachers,” the office said in a statement.

The Opposition Leader’s Office criticised government’s decision to reopen schools to face-to-face classes, saying that teachers and children were now facing risks. “The  evidence is clear – the education sector was wholly unprepared for the reopening  of schools in an environment in which COVID is flourishing.”

GTU Representative, Mr. Collis Nicholson says teachers are being urged to go on strike for the next three days- Wednesday, Thursday and Friday. “While we are shutting down face-to-face schooling, we are also shutting down virtual schooling so those who are teaching Online ‘boots on the ground’ , those who are teaching face-to-face ‘boots on the ground’  and, as a union, we ought to stand by each other so that we can have this work for us,” said Nicholson.

The Education Ministry called the strike call “uncaring and unconscionable”, adding that the move was irresponsible because of learning loss and drop-outs- 600 at the primary level alone- during the past 17 months that schools had been mostly closed.

The ministry added that vaccination for teachers and students is not mandatory. Teachers and other government workers, who have not taken the jab, are being asked to produce a weekly negative PCR test from a private laboratory at their own cost. That approach, they said is what amounts to coercion.