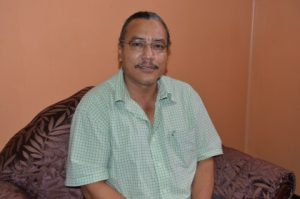 The sources declined to provide details but assured that “he is improving” and that his breathing was still being supported.

It has been more than one week since he has been an in-patient at the Infectious Disease Hospital at Liliendaal, East Coast Demerara.

Opposition Leader Joseph Harmon has since urged Guyanese to get vaccinated against the virus to reduced the chances of falling seriously sick or dying. He has been quoted by the privately-owned Stabroek News newspaper as saying that the Guyana government needs to provide more public awareness and education about the vaccines.

The Guyana government has said that mostly Afro-Guyanese are falling sick with the viral disease and overall most afflicted are unvaccinated.

Afro-Guyanese form the bulk of the support for the PNCR and its allied coalition of A Partnership for National Unity+Alliance For Change.

A  number of opposition lawmakers have been participating in weekly protests in Georgetown and Linden against what they regard as government forcing Guyanese to take the vaccine against their will by giving them two options- remain vaccinated or obtain a weekly PCR test to show their negative. A PCR test costs $25,000.

The Guyana Teachers’ Union has threatened to take the government to court if educators are prevented from entering schools if they are unvaccinated and do not have a negative a PCR test.