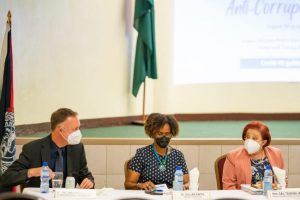 Guyana’s private sector is being integrated into the fight against corruption, but the enforcement of international conventions and domestic laws will depend on solid evidence and strong prosecution, officials said Monday.

Minister of Governance, Gail Teixeira told the opening of an anti-corruption workshop being held by her ministry in collaboration with the United Nations Office on Drugs and Crime (UNODC) that the private sector is answerable in tackling corruption. “Many times the private sector feels that they don’t have to answer to a convention but they do, as do elected officials,” she said. Referring to the “horrific” blacklisting of Guyana by the Financial Action Task Force and the Caribbean Financial Action Task Force in 2014, she cautioned that reporting under the Treaties and Conventions “are not to be taken lightly by any of us.”

Ms. Teixeira later told Demerara Waves Online News/ News-Talk Radio Guyana 103.1 FM that “a lot of it” concerns reporting by local and overseas private businesses  as well as bribery and foreign diplomats.  The Governance Minister said this would be the first time that the private sector would be part of a team that would examine the issues instead of consultants interfacing directly with agencies and organisations.

She said enforcement of domestic laws and international conventions depend heavily on strong evidence and very good prosecutorial skills. “The challenge is that you can say all you want. You have to prove it and you have to before the courts and the courts have to rule on it,” she said.

The Private Sector Commission and Transparency Institute of Guyana Inc have also been involved.

Private Sector Commission (PSC) representative, Retired Major General Norman Mc Lean lamented that corruption is pervasive in Guyana. “Everywhere we go in Guyana corruption seems to be surfacing, if is not the police taking bribe, it is contracts; there is so much that we have to do to bring this back to order,” he said. Asked what is stopping Guyana from combatting corruption effectively, he said “our leadership has to lead and to take the challenge and move forward if we are to really come good with all this wealth.” He said even if there are the best laws, they have to be enforced and people need to do the right thing.

Asked how well the private sector was doing the right thing in the area of corruption. Mr. Mc Lean said, “I don’t know that we got such a good record but we have to do the right thing.”

The Minister said a National Coordinating Committee has been established to allow for a more structured approach of Guyana’s reporting under the United Nations Convention Against Corruption, the Inter-American Convention Against Corruption, Lima Commitment and the United Nations General Assembly’s Political Commitment on Corruption. The committee meets every month and currently has 12 agencies with a view to expanding it.

Minister Teixeira explained that such a mechanism would bring an end to consultants meeting with individual stakeholders and then preparing reports for submission. “That can’t work. It cannot work for our countries. We need to build institutional capacity in our countries that this becomes part of the fabric of what we do,” she said. According to the minister,  Guyana has to  “look at overlaps and where there are synergies” between the two Conventions Against Corruption.  The Governance Minister said partner agencies, civil society and the private sector must see the fight against corruption as an important function instead of it becoming a “political football.”

Depending on the feedback mechanism, she said the committee might be tasked with making recommendations to the minister which could then be tabled to Cabinet.

The Governance Minister said data collection is one of the key challenges that Guyana has to address as part of its reporting system. “This is a big challenge for us, as a country, because there are different spheres of data that needs to be acquired in the case of conventions,” she said, adding that the government system has to be modernised.

The workshop is also aimed at providing a high-level review of the UNCAC Implementation Review Mechanism, focusing particularly on the procedures and various steps in a review, along with an in-depth article-by-article discussion on the chapters under review.

The agencies participating in the three-day workshop include the Public Service Commission, Police Service Commission; the Ombudsman; Integrity Commission; Special Organised Crime Unit; Public Procurement Commission; departments under the Guyana Police Force; Office of the Auditor General; Financial Intelligence Unit; Judicial Service Commission; Office of the Director of Public Prosecutions; the Ministry of Legal Affairs; the National Procurement and Tender Administration Board; the Bankers’ Association of Guyana, as well as the Ministry of Parliamentary Affairs. Over the next three days, the participants will familiarise themselves and receive knowledge on the codes of the UN Convention; public procurement and management of public finances, public reporting and participation of society preventative anti-corruption policies and practices; measures relating to the judiciary and prosecution services, among other key areas.