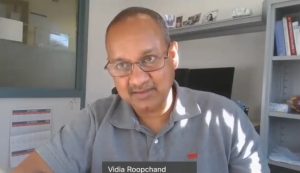 A Guyanese senior virologist at United States drug maker, Pfizer, Dr Vidia Roopchand, has hailed the quality of education being offered at the University of Guyana from which he obtained his first degree.

Before going off to UG and having a memorable and beneficial stint in the Guyana National Service, he received his secondary education at Anna Regina Multilateral School.

Now, a Principal Research Scientist at Pfizer, he appeared on a UG-organised webinar titled “SARS COV-2 (Covid-19) Viral Physiology and Vaccine Development” even offering to return to conduct a few lectures for UG whenever he comes to Guyana.

He praised several past lecturers, including Dr. Ulric Trotz, Dr. George Walcott, Dr. Havidar Singh and Dr. Joshua Ramsammy, for what they did for the Chemistry Department of the Faculty of Natural Sciences and ensure “we are were up to global standards”. “By ensuring that we had a rigorous chemistry programme, we were all able to flourish when we left and came to higher studies,” he said.

Dr. Roopchand advised Guyanese undergraduates to believe in their education and themselves that would allow them to “flourish in any part of the world.”

Forecasting that the  Fourth Industrial Revolution would be defined by nanotechnology, biotechnology, green energy and information technology, he said UG’s curriculum “will give you the foundation to deal with all of that.”

Dr. Roopchand played a major role in developing a polio vaccine as well as another to fight pneumococcal bacteria.