Huge turnout of school-age children for Pfizer vaccine at Movietowne 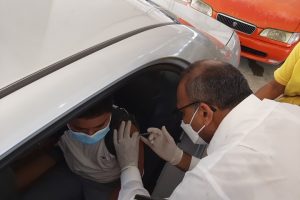 More than 1,000 school-age children by midday Sunday took a Pfizer-BioNtech COVID-19 vaccine, as a steady stream of vehicles continued  to enter the Movietowne compound at Liliendaal where the jabs were being provided.

“This is a great response. We have a lot of parents bringing their children out to get  vaccinated,” said Health Minister Frank Anthony, a medical doctor by profession, who also gave the jab to many children at one of the drive-thru locations in the compound.

He said other drive-thru inoculation exercises would be held at Movietowne at the Providence Cricket Stadium as well as in the other administrative regions.  In addition to the drive-thru, a number of persons have walked into the locations.

The Rotary Club of Demerara has also deployed volunteers to administer the vaccine that has been donated by the United States (US) government.

Minister of Education Priya Manickchand said the vaccination exercise “is way beyond what I expected”. She restated that all adolescents, regardless of whether they are attending schools, would be able to get a jab. “Any child under the age of 18 years old, whether you are in school, work, at a TVET (Technical Vocational Education) Centre, doing nothing at all; once you are under 18 this vaccine is for you,” she told News-Talk Radio Guyana 103.1 FM.

She said the vaccine would provide a pathway for children to return to the classrooms and end missing a significant part of their lives.

A mother told News-Talk Radio Guyana 103.1 FM that she decided to take her children to get the vaccine because “in keeping with the times, we just want the kids to be somewhat social again and hopefully vaccine can afford enough protection.” She conceded that she pondered about the vaccine because it has been recently developed. “It has taken a little bit of thinking but it seems that this is the way to go,” she added

The need to return to the classroom was an almost identical reason given by another mother for her daughter to take the vaccine. “I know she is scared and I want to know if she can take it,” the woman said while standing in the hot sun.

A father said he and his wife were “double-minded” about agreeing with their daughter to take the vaccine. “She wants to take it and we would like to embrace them and their choices and we allow them to take the vaccine,” he said, adding that there was no hard-thinking about what should have been done.

Schools are scheduled to reopen to face-to-face classes from September 6, 2021.