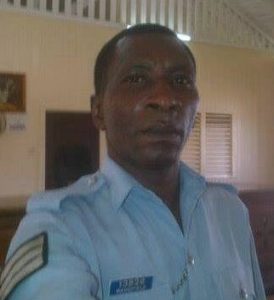 Retired Assistant Superintendent of the Guyana Police Force, Gordon Mansfield was Thursday morning killed in a road accident on the Buck Hall Road while travelling in a vehicle owned by Aurora Gold Mines, police said.

“It was alleged that motor pick # PVV 8623 was proceeding east along the northern side of the road in the process of descending a hill where the driver lost control of the vehicle which flipped several times and ran off the road and ended up on the southern parapet,” the Guyana Police Force said.

The Guyana Police Force said he and four other persons were occupants of the vehicle when the accident occurred at about 10 AM Thursday at 36 kilometres Buck Hall Road.

The injured were transported to the Gold Field Health Centre where Mansfield died while receiving treatment, police added.

The Director of Public Prosecutions said it was “saddened at the tragic death” of  Mr. Mansfield  who had been seconded to the DPP’s Chambers in 2014 and 2016 as a Police Prosecutor under the Early Case Assessment Programme (ECAP). He had prosecuted police matters in the Georgetown Magistrate’s Court 1 and 3.

Former ECAP Police Prosecutor, Deputy Superintendent Vishnu Hunt, who worked with Mansfield at these Chambers, also expressed sadness. He described Mansfield “as a very friendly and well-mannered individual who got along well with his peers, superiors and subordinates.”

ECAP Police Prosecutor Dominic Bess expressed shock at his death and said that Mansfield was definitely one of the most genuine persons he has ever met.