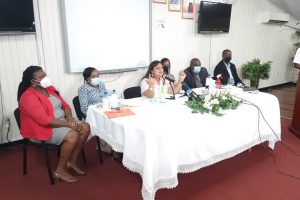 The Ministry of Education on Friday announced that some schools would be reopened on a rotational basis, as part of efforts to stem learning loss.

The Education Minister Priya Manickchand said secondary schools would be reopened according to the vaccination plan.

The Assistant Chief Education Officer (Nursery), Samantha Williams said 41 of 348 Nursery schools would be open to face-to-face learning, while the 307 others would open on a rotational basis.

Ms. Williams said five students would be assigned to each teacher to allow for better management of each child including the possibility of children holding the face masks of the other. She said each child is expected to attend school twice weekly and they would be supplemented by learning packages for each child. Parents would be expected to use those packages to assist in teaching their children at home and reporting back to teachers at scheduled times.

The Chief Education Officer, Marcel Hutson said 44 primary schools would be reopened fully, and 413 others- including nine annexes-would be operating on a rotational basis.

According to the Assistant Chief Education Officer (Secondary) said several schools would be reopened fully and the 126 others would be opened on a rotational basis.  She said that decision was taken in collaboration with schools’ administration’s, Parent Teachers Association and the Regional Democratic Councils.

The Director of the National Centre for Educational Research Development Quenita Walrond said a user-friendly “consolidated curriculum” has been developed. She said Teachers are being trained to use the diagnostic assessment that would be interactive.

Education Minister  Manickchand lamented that Guyanese students have missed a year and a term which could have a long-lasting impact on children. “We will not see the manifestation of the impact now if we continue to keep our doors closed,” she told a news conference that she shared with top education experts of the Ministry of Health.