Assessment of schools for reopening underway 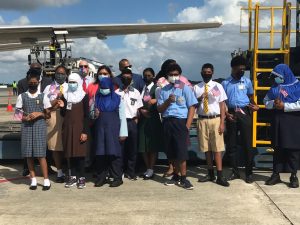 The Ministers of Health and Education as well as US Embassy officials and Guyanese children at the Cheddi Jagan International Airport where the Pfizer vaccines arrived. (US Embassy Facebook picture)

Minister of Education Priya Manickchand on Tuesday said an assessment of schools is underway to determine how schools would function from the beginning of the new school year.

Ms. Manickchand also suggested that the extent to which nursery schools would reopen would depend on the conditions of each school.

The Education Minister made known this position while speaking during a media briefing shortly after the United States’ (US) handing over of 146,250  doses of the Pfizer vaccine to Guyana.

She said that for all the schools, the Ministry of Education would decide which would not be opened for physical interaction, on a rotational basis or fully based on physical space, ventilation and other factors. “We have a very advanced plan for each and every school  and within the next 48 to 72 hours, we will say about every school what we are going to do; all of our schools in the country,” she said.

The Minister of Education said that government has not said “at this stage” that unvaccinated children would not be allowed to attend school, but children and parents are being encouraged to take the vaccine. “That means that community spread in the school as well as children taking back home a virus and interfering with the health and livelihood of the adults around them will be lessened significantly,” she said.

The Pfizer vaccine has been granted Emergency Use Authorisation by the US Food and Drug Administration to inoculate children 12 to 18 years and full authorisation to persons 18 years and older.

She said that that American-made jab would be used to inoculate children all of the country’s over-12  students which would amount to 98 percent of the secondary school students. According to her, the Education  Ministry has received parental consent for about 4,000 children to get the vaccine. “if every parent or student were to consent to being vaccinated in that age cohort, we could resume secondary school with normalcy,” she added.

Ms. Manickchand said the consent forms have been dispatched to every student and parent to allow them to possibly give the green-light to be vaccinated against COVID-19 that has so far killed  more than 600 Guyanese since last year March.

Minister of Health Dr. Frank Anthony noted that the Delta variant is “very detrimental” to children, unlike original variant that had infected them mildly. He revealed that so far more than 4,000 children under the age of 18 who had been infected with the coronavirus.

He said the Pfizer vaccines arrived in Guyana as more new daily cases- 146 on Tuesday- are being recorded, resulting in the need for everyone to be vaccinated as quickly as possible if “we are to beat back the Delta variant.”