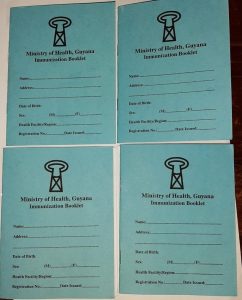 Three men have been arrested in connection with the alleged theft of several blank COVID-19 vaccination books, medical equipment and other items from the Ministry of Health, police said.

“She checked the said books and observed that they were all blank and knowing that the suspects were not supposed to be in possession of them, she immediately brought the issue to the attention of her supervisor who subsequently reported the matter to the Vreed-en-Hoop Police Station. They went on to tell her that the third suspect is waiting to take them to the Diamond Hospital.,”  police said in a statement.

Police said the men were arrested, a motorcar searched and the other items found. Police said the sick leave forms were all stamped with the West Demerara Regional Hospital stamp, and one blue COVID-19 book which was not stamped bears the name and address of a person.

Police said they then went to the hone of the third suspect and conducted further searches which unearthed one machine for testing pressure and a machine for sugar testing in his bedroom.

Investigators said he was questioned about the items and he stated that he bought them in Georgetown, but he could not produce a any receipt for them.