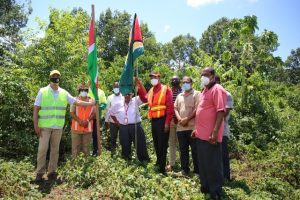 Minister of Public Works, Juan Edghill along with the Surinamese and Guyanese delegation trekking through the bushes to plant the flags at the location for the bridge on the Guyana border

Guyana and Suriname have agreed to a funding and operational model for the bridge across the Corentyne River, even as maritime experts from both countries decide on where the thoroughfare would be located in light of plans for joint gas project and related industries.

President of Guyana, Irfaan Ali and the Surinamese President Chandrikapersad Santokhi on Thursday announced that they have decided that the Design, Build, Own and Operate model should be used to construct the bridge. “The technical advice of the maritime authorities both countries would be included in the decision to determine where and how the Corentyne Bridge will be built,” said Mr. Santokhi at a joint news conference with his Guyanese counterpart.

The Surinamese leader said  a study on the development of west Suriname by his country’s state-owned oil company, Staatsolie, would be included in the decisions.

Mr. Santokhi said the decision must be made within four weeks.

The President said within one week a Joint Evaluation Commission would decide whether the selected eight companies have met the new requirements.

Initially, the plan was for the bridge to hop on Lange Island in the Corentyne River, but with plans now to jointly use their gas reserves for the development of a range of industries on the “frontier” between the two neighbouring South American nations, they now have to rethink the location of the bridge.

Guyana and Suriname, according to the two Presidents, have agreed to formulate a gas strategy that would see the development of a range of industries including the processing of bauxite.

President Ali was tightlipped about estimates of the gas resources in the Guyana-Suriname basin, instead preferring to leave those technical issues to a joint strategy group that would be established.

He said that he and President Santokhi have agreed to invite the Presidents of Brazil and France as well as the Prefect of French Guiana to discuss energy security in the context of the proposed Arco Norte natural gas pipeline and electricity supply to Brazil.

2021-08-19
Denis Chabrol
Previous: Goldsmith, customers robbed of jewellery, cash
Next: Guyanese farmers’ produce could be exported to Europe via Suriname