Guyanese farmers’ produce could be exported to Europe via Suriname 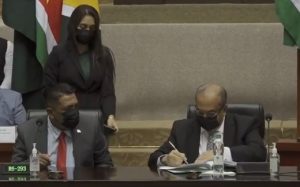 Guyanese farmers’ produce could soon be exported to neighbouring Suriname and possibly to Europe now that the two countries have formally agreed to remove existing barriers, Agriculture Minister Zulfikar Mustapha said on Thursday.

“Through GMC (Guyana Marketing Corporation), we are finding markets for these small farmers. They bring the produce, we help them to package it. We also collect them- because we purchase a number of these freezing trucks and these freezing facilities- and we will be moving across the country to get this produce and encourage farmers and get market for their produce,” Mr. Mustapha told reporters.

Mr. Mustapha and Minister of Agriculture of Suriname, Parmanand Sewdien signed a protocol in the trade of fresh agricultural produce. The accord focusses on ensuring the two countries follow international standards and guidelines relating to the production, certification, processing, packaging, storing and transporting of agricultural produce.

The Foreign Ministry says the terms and conditions will relate only to “commercial shipments of agricultural produce”, with the focus being on conditions under which they would be produced, stored in pack houses and eventually packaged and transported to each country.  The two countries have also agreed to collaborate in accessing the North American and European markets.

The Agriculture Minister said the protocol would help Guyanese agro-processors to have “free passage” for their produce. Quarantine personnel and national plant protection officers from both countries would be onsite to inspect produce from Guyana and Suriname meet the requirements.