Top US Democratic Congressman calls for end to discrimination in Guyana 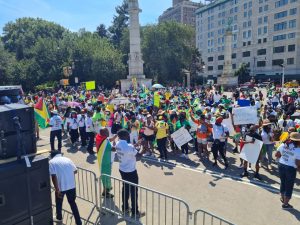 “We stand in solidarity with each and everyone of you to deal with the situation down in Guyana,” he said, adding that “we will not tolerate” racism, intolerance, hatred, xenophobia, racially motivated violence, discrimination and justice.

Addressing a pro-APNU+AFC rally in Brooklyn, Mr. Jeffries also urged American President Joe Biden to replace US Ambassador to Guyana, Sarah-Ann Lynch who had been appointed by the then Donald Trump administration. “It is time for the Biden administration to act…and the first thing that I think that Biden administration needs to do is to get rid of the Trump-appointed Ambassador to Guyana,” he told the more than 2,000 persons who marched through the streets of Brooklyn.  Ms. Lynch as well as other top Western diplomats had come in for scathing criticism for stating that there had been serious voter irregularities at the March 2, 2020 general elections. After five-month long wait, the Guyana Elections Commission (GECOM) had used the results from a national vote recount and had declared the PPP the winner.

Opposition Chief Whip Christopher Jones indicated that lawmakers from his side, many of whom attended the march and rally, are taking advantage of the annual August-October parliamentary recess to meet with United States officials in Florida, New York and Atlanta.

The Guyana government two months ago had been at pains to fend off concerns by two other Democratic Congressmen Hank Johnson and  Albio Sires who had urged no discrimination, equitable distribution of the country’s wealth and for inclusivity of government, opposition and other stakeholders in governing Guyana.

A  number of APNU+AFC parliamentarians and senior regional and local council elected leaders also addressed the rally. Several of the speakers ensured that they highlighted the fact that they are Indo-Guyanese, even as they accused the Irfaan Ali-led  administration of bad governance including corruption and discrimination. “This mass discrimination that is happening is simply unacceptable and we will not tolerate it,” said Vice Chairman of Region Seven (Cuyuni-Mazaruni), Kamal Persaud.

Executive member of the People’s National Congress Reform, Aubrey Norton assailed the PPP administration vowed that “we will rise up and defeat” the PPP to ensure there is unity in Guyana, progress and development.  “We will organise and place them on the backfoot. They mean no good for Guyana,” said Mr. Norton who will by vying for the position of PNCR Leader whenever his party holds its overdue Congress.

He slammed the Ali-led administration for keeping out Haitians by reintroducing visa restrictions because “they are Black” although thousands of Brazilians, Venezuelans and Cubans are in Guyana.

Both the PNCR-led APNU+AFC and the PPP administrations have conceded that thousands of Haitians had until recently been coming to Guyana legally and leaving illegally for Brazil and French Guiana via Suriname.

The former PNCR General Secretary appealed to the members of the Diaspora to support the opposition to back uo the work of the young, vibrant opposition parliamentarians while taking on the PPP in extra-parliamentary action. “We have to take it to the streets of Guyana and beat them,” he said.

Mr. Norton hinted that one of his priorities is to fight for a new voters’ list that would not be bloated.  “When we get a new voters list, we are going to beat the People’s Progressive Party hands down because they do not have the numbers,” said Mr. Norton, a Political Scientist.