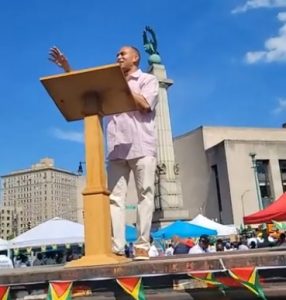 “Further, we note the remarks made by Congressman Hakeem Jeffries, and find them to be quite appalling. We are disappointed that the Congressman has allowed himself to be negatively influenced by individuals who are adamant in destroying our beautiful country by instigating violence and division amongst our people,” Mr. Phillips said in a statement.

The Prime Minister’s criticism came hours after Mr. Jeffries told a gathering of mainly Afro-Guyanese opposition supporters at a rally that he stood in “solidarity” with them in addressing the issues in Guyana.  The Chairman of the House Democratic Caucus had also stated that the Biden administration would not  “not tolerate” racism, intolerance, hatred, xenophobia, racially motivated violence, discrimination and justice.

But Mr. Phillips urged the US Congressman not fall prey to Guyana’s opposition elements and instead advised him to meet with government representatives for their account of the situation in this oil-rich South American nation. “We call on the Congressman to desist from joining with these individuals in creating chaos in our communities at home and in the Diaspora. We invite the Congressman Jeffries to have discussions with us on matters of mutual interest,” the Prime Minister said.

Like two months ago when two other Democratic Congressmen had similarly expressed concern about the Irfaan Ali-led administration’s perceived discrimination, inequitable distribution of the country’s wealth and a lack of inclusivity of government, opposition and other stakeholders in governing Guyana, the Guyana government on Sunday night again sought to dispel those concerns.  “We wish to emphasize that we are a Government for ALL the people of Guyana. Evidence exists that we uphold democratic principles, adhere to equitable practices, embrace diversity and inclusivity and promote transparency at all levels. We continue to show strong leadership to the people of Guyana and abide by the principles as reflected in our national motto- One people, One Nation, One Destiny,” said Mr. Phillips, a former Chief-of-Staff of the Guyana Defence Force (GDF).

Mr. Jeffries said himself and US Congresswoman Yvette Clarke, who is also a member of the Black Caucus, wanted to to address “injustice” in Guyana where Black Lives also matter. He said he and Clarke want the President of US Joe Biden to “get rid” of the Trump-appointed Ambassador to Guyana, Sarah-Ann Lynch.

Referring to remarks made by the several opposition Guyanese lawmakers and regional and local elected leaders, the Prime Minister condemned claims of racial discrimination, corruption, and electoral irregularities. ” We wish to place on record that we reject all the statements delivered at today’s march and rally. The APNU continues to propagate racial division and tension in Guyana and in the Diaspora through the dissemination of inaccurate information about the Government of Guyana and by extension, the People’s Progressive Party,” he said.

Mr. Phillips said those attacks were a  mere desperation by A Partnership for National Unity (APNU) who, one year later, refuses to accept the results of the 2020 General Elections needless to say, after a lengthy court battle.