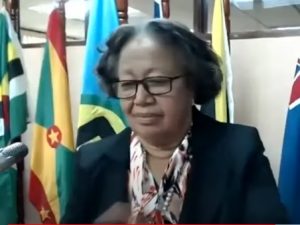 Newly-installed Secretary-General of the 15-nation Caribbean Community (CARICOM), Dr. Carla Barnett on Monday made known her stance against attacks on political leaders.

Labelling the recent head injury of St Vincent and the Grenadines Prime Minister Ralph Gonsalves by  a projectile hurled by anti-vaccination protester as a “despicable attack”, she categorically stated her strong position against such actions.

“Such violent actions have no place in our political discourse or in society generally  and must be condemned unreservedly,” Dr. Barnette said during her formal installation that was held virtually.

Dr. Gonsalves has said that his condition continues to be monitored by doctors. A woman has since been charged but she has claimed that police had forced her to confess that she committed the act.

Opposition Leader Dr. Godwin Friday has dissociated himself from the attack on the Prime Minister, but he has accused the Gonsalves-led administration of turning St. Vincent and the Grenadines into a ‘police state’ by raiding the houses of political opponents, seizing their devices and arresting them.

Prime Minister Gonsalves was struck on the head by a brick as he walked to the Parliament Building because protesters had blocked his vehicle from going further.

Prior to his assault, the President of Haiti Jovenel Moise had been shot dead at his private residence by Colombians.