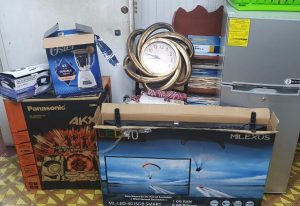 Police said a car that was allegedly used to transport the suspects who carried out a daring robbery at Wallison Enterprise in Gordon Street, Kitty on Thursday last when they escaped with $58M in cash and raw gold has been found.

Crime Chief Wendell Blanhum said in a Guyana Police Force release has indicated that the driver of the car abandoned it in front of his home at Lot 435 Cummings Lodge, East Coast Demerara and left for the interior.

“Persons in the area said prior to leaving, he brought home a canter load full of household items which he bought a day after the robbery,” the Guyana Police Force said.

According to the Crime Chief, he was the driver of the car on the day in question and is currently being pursued by the police.