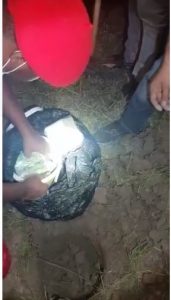 The money being removed from a bucket that was buried in a hole in the yard where the GDF Sergeant resides.

Eighteen million dollars have been recovered and two members of the Guyana Defence Force (GDF) have been arrested in connection with last week’s multimillion dollar cash and raw gold heist, authorities said.

“The Guyana Defence Force acknowledges that two of our ranks are currently under investigation for their alleged involvement in the robbery of the gold trader, Wallison Enterprise,” the military organisation said on Sunday.

News-Talk Radio Guyana 103.1 FM/ Demerara Waves Online News was reliably informed by well-placed sources that one of the detainees is a GDF Sergeant and his girlfriend is attached to the Coast Guard.

A third person, who was the security guard on duty at the Gordon Street, Kitty, Georgetown-based gold dealership, has also been arrested. Sources said he and the Sergeant are friends.

“We recovered a significant part of the money,” Police Commissioner Nigel Hoppie told Demerara Waves Online News/ News-Talk Radio Guyana 103.1 FM. Police later said in a statement that the money was “found buried at the residence of one of the suspects.”

Ms. Hoppie said the three arrested include accessories to the crime.

The Police Commissioner said the “intense investigation” was continuing apace as part of efforts to recover the additional money and the raw gold that was carted off from last week Thursday from Wallison Enterprise ,  Lot 23 Gordon Street Kitty Georgetown. “The investigations are ongoing to ensure that we recover the gold and the remaining money,” he said.

On entering the gold dealership, the bandits tied up the owner Mr. Wazim Kassim and escorted him to where the money and raw gold were stored.

Several years ago, three soldiers had been convicted for the murder of a gold dealer and dumping of his body in the Essequibo River after robbing him of a box containing raw gold.