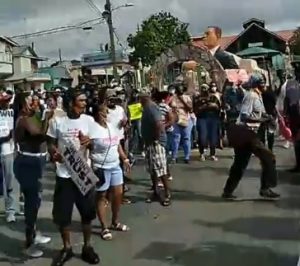 Antigua and Barbuda police on Sunday afternoon fired teargas on hundreds of protesters who massed in the capital, St. John’s, despite a stern warning by National Security Minister Steadroy Benjamin not to violate police’s refusal to give permission.

“Antigua and Barbuda will never be allowed to become a lawless society so if a small group of persons believe that law enforcement will back down when their breach is unlawful behaviour, then they have another thing coming,” he said a day earlier.

Antigua Newsroom reports that the Police Commissioner had refused to allow the Freedom Fighters for Antigua and Barbuda [FFFA&BA] to hold the march.

This is the second major unrest in the Caribbean against efforts by governments to pressure their populations to take the COVID-19 vaccine; the first having been last week Thursday when the Prime Minister of St Vincent and the Grenadines Ralph Gonsalves sustained a head injury by a projectile that had been lobbed by anti-vax protester.

St Vincent and the Grenadines Opposition Leader Godwin Friday has endorsed the protest but has condemned the attack on Dr. Gonsalves.

Guyana’s opposition has so far held smaller protests confined largely to the Square of the Revolution in Georgetown, although there have been small pockets of protests in a small number of East Coast Demerara villages and in Linden. For them, the vaccination process is just one of their grievances.