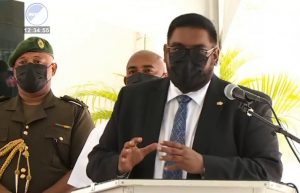 President Irfaan Ali on Friday announced that Guyana’s major Online marketplace, www.stabroekmarket.com , would be launched before yearend and would offer even products by small-scale businesses to the rest of the world.

“We are also working on a project to launch what would be like our own Amazon , www.stabroekmarket.com , where we are going to give every single small operator, small entrepreneur the opportunity to market their products to the rest of the world,” he said.

Dr. Ali said the Online market is expected to be launched in September to pave the way for Guyana’s honey, beauty products, and other items produced by women and Indigenous Peoples would be sold to foreign markets.

The President also restated plans to expand the road network along the East Bank Demerara, Georgetown and East Coast Demerara. The Indian government is financing a section of that road-link. While Guyana awaits lower electricity cost from the Wales gas-to-shore project and the Amaila Falls hydro-power project, he said government was investing in additional 46 megawatts of generating capacity and fix the transmission and distribution network.

Dr. Ali said he was recently briefed about updated plans by investor Damian Fernandes to produce corn locally for the production of local feed and so cut the cost of import for that grain. 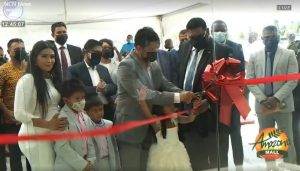 Also on the cards, according to the Guyanese leader, is the construction of several more branded hotels and shorebases on the west bank of the Demerara River. “These are the initiatives that would help to transform our country, that will bring the development mix that is necessary to take our country forward, that would ensure development is done in a way that does not expand inequality but bridges the gap,” he said.

The President promised that his administration would “give back to low-income” families as part of a plan to ensure all Guyanese benefit.

He appealed to local businesses to form themselves to get “enough muscle” to go after business opportunities  that they might be unable to do individually.

The Amazonia Mall is owned by former West Indies cricket captain, Ramnaresh Sarwan, who said the project was financed by Republic Bank.