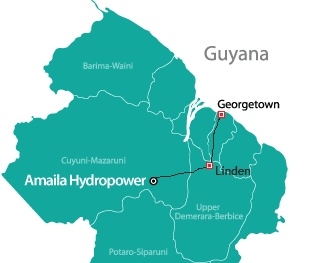 Projecting that he Guyana Power and Light (GPL) will require at least 465 megawatts of electricity by 2025, the Guyana government has taken steps to revive plans to construct the Amaila Falls Hydropower station.

The Prime Minister’s office has issued a request for proposals, stating that government hopes that construction of the hydropower station will begin in 2022 and will be completed by 2025.

“The Office of the Prime Minister is looking for a partner to develop the project. It has published a request for proposals, which outlines two options for the project’s development,” government’s Department of Public Information (DPI) said in a statement.

Government is inviting proposals for a Build, Own, Operate and Transfer model in which the investor will build the hydropower station and transfer it to the government at no cost after 20 years.

Investors can also propose a Design-Build-Finance model for the development of the project up to commissioning date.

The Government would take over the project and repay all loans, only upon and at satisfactory completion of construction and commissioning.

Government says the Amaila Falls Hydropower Project is needed for GPL to supply 465 Megawatts of electricity. GPL’s Chief Executive Officer has already announced that financing is needed for an almost US$300 million new transmission and distribution network.

The proposed completion date for the 165 MW AFHP would see it being completed one year after the 300 megawatt Gas-to-Shore project, which will supply at least 250 MW.

The project, under the previous People’s Progressive Party Civic administration, had been cancelled by the the-then David Granger-led A Partnership for National Unity+Alliance For Change (APNU+AFC) administration almost immediately after coming to office in 2015.

A Norwegian consulting firm, Norconsult, had said that the Amaila Falls Hydropower Project was the best means of Guyana weaning itself off fossil fuel-based electricity, but had flagged the availability of adequate water all year round as a major concern. ”

Norconsult found that the decision by the PPPC administration to build the Amaila Falls Hydropower station did not take into account latest data on the inflow estimate of the reservoir in the dry months.

“It is clear, however, that the low season inflow will not be sufficient for continuous full capacity generation. That means additional generation from other sources will be required in the dry season from a certain year as the demand is growing, possibly already from the year of commissioning of AFHP,” states the report. “For reducing the present hydrological uncertainty, which is especially desirable in the low flow season, longer periods of direct measurements in Kuribrong River at the project site are required. The main benefits would be verification of the believed underestimate of the water flow in the dry season and thereby more reliable estimates of the low season energy production and improved basis for planning the required low season back up capacity,” the report states.