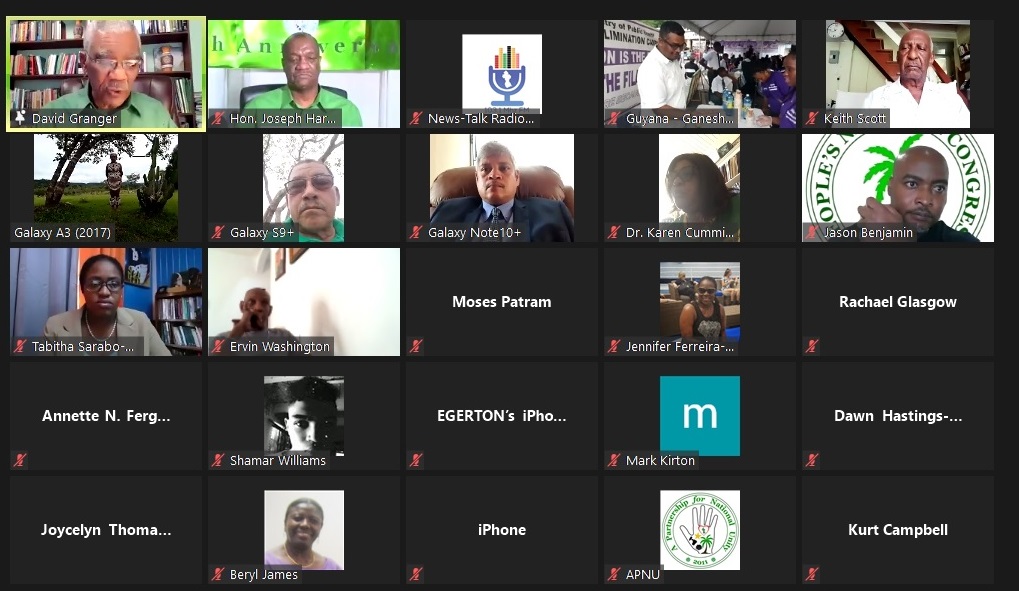 People’s National Congress Reform (PNCR) Leader, David Granger on Thursday appeared to have dug his heels in, despite dissent among several of his party’s Central Executive Committee (CEC) members over his alleged failure to properly consult that body about the entry of two unknown parties into A Partnership for National Unity (APNU).

The CEC group, moments before a virtual observance of APNU’s 10th anniversary, circulated a statement accusing Mr. Granger and PNCR General Secretary Amna Ally of bringing in the Guyana Nation Builders Movement and the Equal Rights and Justice Party without consultation and refusing to put that process on hold.

But Mr. Granger restated his welcome to the GNBM and ERJP. “It was regretted, as a consequence, that two partners – the Justice For All Party and the Working People’s Alliance chose to withdraw from the partnership on their own accord, but happily we were able to welcome the Equal Rights and Justice Party and the Guyana Nation Builders Movement both of which are led by persons who have already served not only in the parties which left the partnership but also in the Coalition government,” he said.

Mr. Granger did not refer to the statement by the CEC members. The PNCR General Secretary is already on record as saying that APNU is governed by its own rules, but one of the CEC members on Thursday countered, saying that individual parties need to concur before decisions are made by the Partnership.

Ms. Sarabo-Halley delivered closing remarks at the virtual APNU anniversary event.  She, Sharma and Keith Scott of the National Front Alliance were among the more than 60 attendees.

The Justice For All Party exited the coalition after Mr. Granger had stated that only those that had obtained about 7,000 votes at the March 2, 2020 general elections would have been allocated a parliamentary seat. The Working People’s Alliance pulled out of APNU over a quarrel about whether that party had enjoyed the right to pick from among four nominees that had been submitted to Mr. Granger who is the Representative of the List of candidates for APNU+Alliance For Change. Eventually, Tabitha Sarabo-Halley resigned from the Chairmanship of the WPA and remained as a parliamentarian.