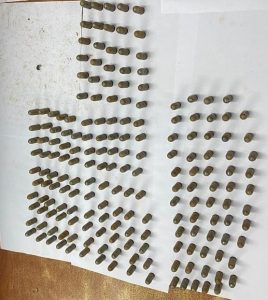 The 190 live rounds of ammunition that police said they found in a house at Pike Street, North Sophia, Georgetown.

Six persons have been arrested in connection with more than 13 kilogrammes of marijuana and 190 rounds of ammunition that were seized from a house at Pike Street, Sophia, police said.

During a cordon and search operation at about 3 AM in North Sophia, police said they seized 13.166 kilogrammes of marijuana and 190 live .45 bullets.

The Guyana Police Force said during the search, a black bulky plastic bag of suspected cannabis was thrown out of the window but the occupants said they knew nothing about it.

“The suspected cannabis was shown to them and they all denied knowledge or ownership,” police said. A scale and another bag of marijuana were also found about 30 feet from the house.

Police said the ammunition was found in one white plastic bucket with a small rice bag. “The suspects  who were arrested were also questioned in respect to the other suspected cannabis and ammunition and they all denied having knowledge of same,” police said.