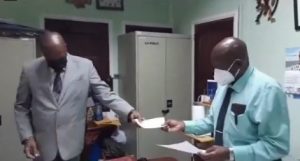 “The APNU+AFC Coalition, in filing these No Confidence Motions, is acting on behalf of hundreds of thousands of Guyanese who have lost all confidence in the performance of these two incompetent ministers to perform their duties,” Opposition Leader Joseph Harmon said.

The People’s Progressive Party Civic (PPPC) enjoys a simple majority in the National Assembly and will most likely secure the vote of the Liberty and Justice Party.

The motions were filed in the name of Mr. Harmon  “Whereas the Minister of Health has persistently demonstrated his inability to effectively undertake his duties in the health sector for the welfare of our citizens” and “be it resolved that this House express a lack of confidence in the Minister of Health and call for his immediate resignation.

Mr. Harmon said in a statement that the management of the spread of COVID-19 has been woeful, there has been questionable procurement of vaccines and confirmed COVID cases and deaths are spiraling out of control.

“Dr. Anthony must bear direct responsibility for the health care crisis and disaster he has placed Guyana in, imperiling the lives and health and wellbeing of every citizen,” the Opposition Leader said.

The Opposition Leader, who is a retired Guyana Defence Force Lieutenant Colonel, said that crime in all forms is on an astronomical increase in Guyana. He said the no-confidence motion was filed because robberies of various kinds, break and enter, murders, vehicular homicides, violent assaults have enveloped the society.

“Citizens are living in mortal fear. The PPP has effectively already filed their own tacit No Confidence Motion in Benn having sidelined him in seeking to establish a parallel police force at the regional level. Today we file the formal, official No Confidence Motion against the failure that is Minister Robeson Benn,” he said.