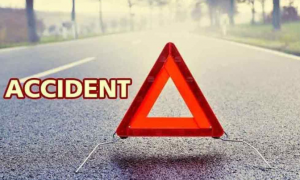 A goldsmith of Enmore, East Coast Demerara was last night crushed by a truck that had just started reversing, police said.

He has been identified as , 38-year old Rajin Persaud of Enmore-Hope, East Coast Demerara. The accident occurred Monday at about 7:30 PM at Hope West, Enmore Access Road.

Investigators were informed that the lorry was stationary on the northern parapet of Hope West Enmore Access Road in the vicinity of the driver’s premises offloading a load of sand.

“As the driver of the motor lorry lowered the tray and started to reverse, his wife shouted out to him that he  ran over one of their dogs.  Upon checking he observed an identifiable male under the truck with what appears to be blood about his body,” the Guyana Police Force said.

He was then picked up by public-spirited citizens and escorted to the Georgetown Public Hospital where he was pronounced dead by a doctor on duty at the said institution.

A breathalyser test shows that the driver was not under the influence of alcohol.