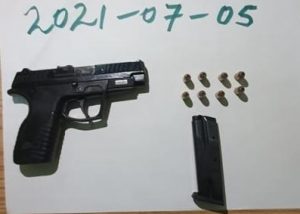 Retired Police Officer Grantley Rodney’s handgun and ammunition that were recovered from a man in Wismar, Linden.

Eleven suspects in Linden have been arrested and police have recovered the 9 MM pistol and ammunition that had been  stolen from a retired police officer’s car three days ago, police said.

The Police Force explained that the first detainee was arrested with a firearm and eight matching ammunition which is the property of  Retired Deputy Superintendent Grantley Rodney that was stolen on July 4, 2021.

Mr. Rodney, a serving female Police Inspector and a housewife had gone swimming at Dakara Creek, Wismar, Linden when someone broke his car window and carted off the gun, ammo and other valuables.

The Guyana Police Force said the gun, eight matching rounds and 11 grammes of marijuana were seized by police during an operation by lawmen in the Wismar Station district. The operation was in response to information about “drugs, guns, ammunition or anything unlawfully obtained,” police said.

The 22-year old man, in whose possession the gun and ammo were found, was also arrested for a series of break and enter and larceny.

The articles recovered were photographed and lodged. The detainees remain in custody pending investigations.