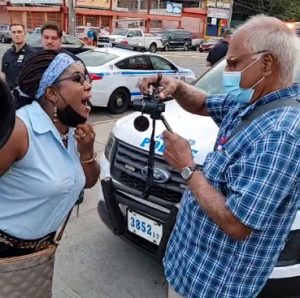 Opposition lawmaker Maureen Philadelphia makes her point strongly as a man takes her picture while she and others were protesting outside a restaurant in Queens, New York where Attorney General Anil Nandlall was meeting his party’s supporters.

As a small group of opposition supporters protested outside a restaurant in Richmond Hill, Queens, New York about the “installed” People’s Progressive Party Civic (PPPC) administration, Attorney General Anil Nandlall was promising that government will be fair and inclusive as possible.

“We have a duty and we have a responsibility and we are committed to inclusive government,” Mr. Nandlall told party faithful.

The administration in recent days appears to be at pains to assure Guyanese and the international community that there is no discrimination against anyone, there will be inclusive governance and that Guyanese will benefit from the wealth, after two American Congressmen Albio Sires and Hank Johnson had publicly called for these steps to be taken.

Mr. Nandlall, who is a member of his mainly Indo-Guyanese backed People’s Progressive Party’s (PPP) Executive Committee stated categorically that no one would be discriminated against and this has been reflected in all of policies by government ministries. “I want to reiterate our government’s commitment to govern in the fairest and most inclusive manner and we are committed to the ideal that every Guyanese must feel, must actually feel that they have an equal place and that they are entitled to equal opportunities to realise their dreams and their potentials,” he said.

Like Governance Minister Gail Teixeira,  President Irfaan Ali ruled out bilateral political talks with A Partnership for National Unity+Alliance For Change  (APNU+AFC) unless that coalition admits that it lost the March 2, 2020 general and regional elections. “I’m not averse to meeting the main parliamentary opposition. However, it’s designation of my government as illegitimate presents practical obstacles to any such engagement. The parliamentary opposition must understand they have to respect the will of the people, they have to honour the will of the people and in respecting  and honouring the will of the people, they have to respect the government of the day that was elected by the people of the country,” Dr. Ali told the audience virtually. 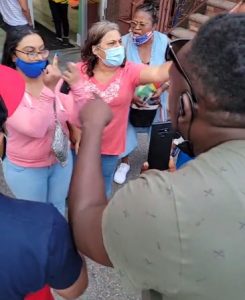 He said his administration has been including persons who have the national interest, experience and expertise in managing Guyana. The President said he has also held talks with trade unions, religious organisations and the private sector to benefit from their insights and learn  more about their concerns.

The President restated that the One Guyana Commission would be established as part of efforts to address real and perceived racial problems in Guyana.  “The Guyana that we want is one that is united. In establishing a united Guyana, we will not ignore or avoid addressing the thorny issues of race and inequality. I believe that, yes, we have to deal frontally with these issues,” he said. The President said the Guyanese Diaspora would be consulted by the Commission.

Outside the venue where the meeting was being held, about 30 opposition supporters used loud hailers to vent their anger and frustration at what they termed discrimination against Afro-Guyanese.  Among them was APNU+AFC parliamentarian Maureen Philadelphia who claimed that the real perpetrators have not been charged with the murder of Isaiah and Joel Henry last year September, but four young Afro-Guyanese were earlier this week charged with the murder of 17-year old Haresh Singh.  “We are here to send a clear signal to the PPP racist organisation that we are not afraid, we are not afraid, we are not afraid and we are going to do it again and again,” she said. Ms. Philadelphia said three “vulnerable” persons  have been charged with the murder of the Henry cousins whose bodies were found aback Cotton Tree Village, West Coast Berbice. 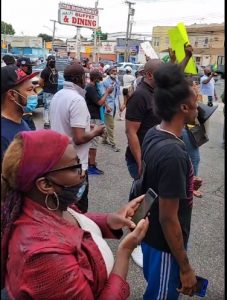 The group of APNU+AFC supporters protesting outside a meeting whose speakers included Attorney General Anil Nandlall.

Ms. Philadelphia and others reiterated that the People’s Progressive Party Civic (PPPC) administration was “installed” rather than elected at the March 2, 2020 general and regional elections. “We are not going to surrender. The PPP has been sending subliminal messages and we will not be deterred by those messages…The world knows they were installed, when the world knows they were installed. They are illegal,” she said.

Several lightly armed members of the New York Police stood guard at strategic points outside the venue as the protesters chanted behind barriers.