Attorney-at-Law Nigel Hughes insists murder accused was not at crime scene; livestream done instead by another lawyer 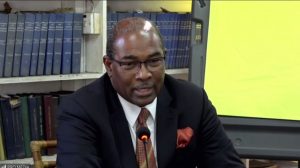 Attorney-at-Law Nigel Hughes is insisting that Gladston Henry Jr. was at home with family members watching a livestream of the autopsy that was being conducted on his brother, Isaiah Henry, and so was nowhere near the scene of Haresh Singh who was killed last year September.

But Mr. Hughes is now saying that it was not the father of the murder-accused who had livestreamed his other son’s autopsy. Instead, Mr. Hughes said the live stream was done by Attorney-at-Law Patrice Henry.

“The entire Postmortem of Isaiah and Joel Henry was Video recorded and transmitted by Attorney at law Patrice Henry on the instructions of Gladston Henry on the 9th day of September 2020. A copy of video of the post mortem recorded by Patrice Henry is attached.

The live recording of the post mortem by Patrice henry was watched by the persons who were at the home of Gladston and Patricia Henry on the 9th day of September 2020,” Mr. Hughes said.

Mr. Hughes released the recordings to the media.

After Gladston Henry Jr. and four others were charged with the murder of Singh, his mother, other persons and Attorney Hughes had said that it was Gladston Henry Snr. who had live-streamed and recorded the autopsy of Isaiah Henry.

Mr. Hughes said after each attempt by police to interview of Gladston Henry Jr.; the investigators had been asked whether they had wanted alibi statements but the police had stated that they had needed instructions from their senior officers.

“The issuance of a Press Release by the Guyana Police force in which they classified the alibi witnesses as criminals who had attempted to pervert the course of justice before they had even spoken with any of them or investigated their alibi statements, speaks volumes of the interest of the Guyana Police Force in conducting a fair investigation into the murder of Haresh Singh,” Mr. Hughes added.

Concerning the Guyana Police Force’s denial that investigator Inspector Sarabo had never been at the home of Gladston Henry Jr. and had never seen him; Mr. Hughes says the police own video images confirmed that he had been wearing the same clothes.

Police have since launched an investigation into attempts to pervert the course of justice by providing false information about the location of Gladston Henry Jr. on September 9, 2020.  They have been interviewed by police, placed on bail and ordered to return to court on July 6 at 9 AM.