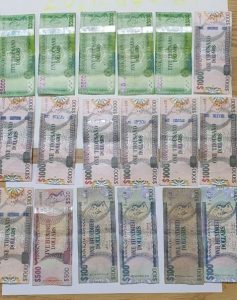 A man, who allegedly attempted to offer a more than $30,000 bribe to a police sergeant, after he was held for marijuana possession, now faces two charges, police said Friday.

Police say that in addition to the drug charge,  the 25-year old man has been accused of attempting to pervert the course of justice. The offences were allegedly committed on Thursday in Linden.

Investigators say that after the man was arrested at his home at Wismar for being in possession of 88 grammes of marijuana, he was taken to the Mackenzie Police Station.

There, he allegedly took out $33,900 from his pants pocket and offered the station sergeant to drop the matter.

The man allegedly told the policeman that he could not afford to go to prison because he has a four-year old daughter.

When the man was told of the offence of perverting the course of justice, he reportedly told the sergeant. “Sir, is just a chance I want fuh this weed, I gat a four year old girl child and I really sorry fuh pass the money”.