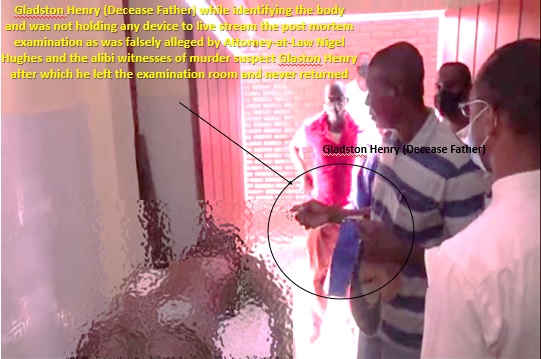 Hours after Attorney-at-Law Nigel Hughes and family members claimed that a murder accused was never at the crime scene, police said a review of its facts prove otherwise and they are now probing alleged attempts to make it difficult to determine who committed the crime.

Glaston Henry is among four persons charged with the murder of 17-year old Haresh Singh in September, 2020 at Number Three Village, West Coast Berbice, but Henry’s mother and others have since claimed that he had been nowhere near the crime scene.

Police relied on its video evidence that it referred to in stating that the charges were instituted upon the legal advice received from the Director of Public Prosecutions (DPP). “To indicate that this charge is a miscarriage of justice is wholly unmeritorious and can only be viewed as a desperate and deliberate attempt to pervert the course of justice,” the police force added.

Among the claims being made is that Henry had been at home watching a live video transmission of the post mortem by his father, but the Guyana Police Force said it has since reviewed images showing that the father at no time had recorded the post mortem. Instead, police added, he had merely gone to identify the body of Isaiah Henry who, along with his cousin Joel, had been hacked to death and their bodies found aback a coconut estate at Cotton Tree Village, West Coast Berbice.

“It therefore follows, that all nine purported alibi witnesses are currently being sought by the GPF in connection with alleged attempts to pervert the course of justice since if the father of Glaston Henry never recorded any post mortem examination live, then clearly they could not have been home watching a live video together with Glaston Henry,” the Guyana Police Force said.

In an effort to counter to counter the claims by Mr. Hughes and his clients, police produced images of the videos showing Mr. Henry (senior) at the mortuary but with no phone conducting a recording.

Further, the Guyana Police Force said Glaston Henry did not offer any alibi during police interviews on June 26 and 27. “At no time whatsoever did the suspect inform the investigators that he had an alibi or that he was elsewhere during the time of the murder,” the civilian law enforcement agency. Police said that “oddly” Attorney-at-Law Hughes afterwards stated that the murder accused was elsewhere, but did not submit an alibi statement on record and none of the witnesses had ever made themselves available to be interviewed.

Police said that it was not until June 28 after 4 PM that previously prepared alibi statements were submitted, prompting police to make efforts to contact the witnesses but could not locate two of them-  Bibi Shaheman and Claudette Kurtzious- at their given addresses.

Noting that perhaps it eluded Mr. Hughes’ memory that the entire post mortem examination of Isaiah Henry and Joel Henry were video recorded by the investigators in his presence, police said a review of that recording proves that  Glaston Henry was not at home watching a video. “This diametrically opposes what is being peddled as the alibi for Glaston Henry that he was home at the time watching a live video recorded by his father, when his father was never present in the room during the conduct of the post mortem examination,” police said.

Further police said the purported alibi witnesses directly contradict other individuals who placed Glaston Henry in the company of the other suspects at Haresh Singh’s home and at the scene of the crime at the material time.

The Guyana Police Force also disputes claims by the lawyer that Inspector Sarrabo had been present in Berbice at the home of the family of Isaiah Henry while the post mortem was being conducted.  “However, this contention was also another blatant attempt to mislead and distort the facts in this matter since Inspector Sarrabo can be seen present during the post mortem examination, in the recording made by the investigators and also in the background of a ‘Prime News’ video interview that was being conducted with Mr. Hughes immediately after the conclusion of the post mortem examination,” police said.