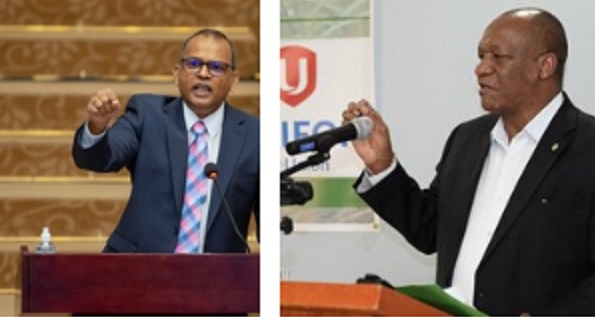 Health  Minister Dr. Frank Anthony on Saturday refused to formally provide specific information about the batch of 200,000 doses of  Russian-made Sputnik V vaccine, but instead reiterated that all of the required procedures have been followed before and after the jabs were imported.

Dr. Anthony said that after the vaccines arrived here , the Ministry of Health checked all of the information from the Sputnik V vaccine manufacturer. “On arrival of the vaccines into Guyana, the GA-FDD (Government Analyst Food and Drug Department) was informed that the Maternal and Child Health (MCH) Unit of the Ministry of Health, verified the manufacturer information, batch numbers and quantities, using the importation document received from the supplier,” the Health Minister told the Opposition Leader.

The Health Minister said the GA-FDD granted Emergency Use Authorisation in keeping with recognised procedures and that all of the steps have been followed. “All due diligence was conducted prior to procurement of all vaccines. Rigid and continuous monitoring of vaccines storage temperature are in place from manufacturing factory, throughout transportation to Guyana, during storage in our bonds and at utilization sites,” the Minister of said.

The Opposition Leader had specifically asked for the quantities and batch numbers of the vaccines purchased from Sheik Al Maktoum and/or Umar Zahoor and their partners; shipping information including transshipment information and the conditions under which vaccines were stored for shipment and the procurement process utilized including the due diligence done on the supplier.

President Irfaan Ali has since stated that the batch numbers are stated on the vaccination cards of recipients. The Health Minister has said over the past two days the Russian-made vaccines were flown from Russia to the United Arab Emirates to Miami and then to Guyana.

The Health Minister has acknowledged that the Sputnik V vaccines have not yet been approved by the World Health Organization,  but using the example of more than 70 countries worldwide that have authorised their use, Guyana has issued Emergency Use Authorisation.

Dr. Anthony has already publicly stated that after several futile efforts to obtain vaccines from  Pfizer-Bi0Ntech, Moderna and Johnson and Johnson, Guyana turned to the Russian Direct Investment Fund. That entity, he said, then referred Guyana to Sheik Al Maktoum in the United Arab Emirates to purchase the jabs worth more than GYD$1.2 billion.

Following is the full text of the Health Minister’s letter to the Opposition Leader.

Leader of the Opposition

Office of the Leader of the Opposition Lot 39, Croal Street,

Thank you for your letter which we received on June 18, 2021, requesting information on Sputnik V Vaccine.

An exhaustive set of questions were posed to me in the National Assembly on Monday June 14, 2021 by the Opposition’s MPs, at which you were present and even asked a few questions of your own. I patiently answered all questions, especially those relating to the source of Sputnik V procured, the quantity procured, the arrival of the vaccines, and the shipment arrangements, including temperature monitoring.

It should be recalled that the Government of Guyana held a briefing session with all political parties on the 26th April, 2021 at the Convention Centre, where your representatives had the opportunity to ask several questions and were provided with all the answers.

I must express my Ministry’s and our Government’s disappointment in your statements, which were done without any evidence, deeming the Sputnik V vaccines used in Guyana as “FAKE”. In doing so, you intentionally encouraged citizens to not take the vaccine and, therefore, put their lives at risk. You publicly demanded the suspension of vaccination with Sputnik V and, therefore, further putting people’s lives in jeopardy.

I urge you to present the evidence that the vaccines are “FAKE”, and if you cannot then you should withdraw your statement and publicly apologize to the Guyanese people.

H.E President Irfaan Ali has publicly responded to you rejecting your demand. In writing today, I
reiterate the President’s response that we will continue to vaccinate people with the vaccines we
have available to us at this time. These vaccines include Astra Zeneca, Sputnik V and SinoPharm.

Guyana has not imported any vaccine without the requisite registration and approval for emergency use by Guyana’s regulatory agency, which is the Government Analyst Food and Drug Department (GA-FDD). The GA-FDD issued a statement to that effect on June 17, 2021 following your irresponsible media conference.

Moreover, all vaccines imported into Guyana met the requirements of the GA-FDD. On arrival of the vaccines into Guyana, the GA-FDD was informed that the Maternal and Child Health (MCH) Unit of the Ministry of Health, verified the manufacturer information, batch numbers and quantities, using the importation document received from the supplier.

All due diligence was conducted prior to procurement of all vaccines. Rigid and continuous monitoring of vaccines storage temperature are in place from manufacturing factory, throughout transportation to Guyana, during storage in our bonds and at utilization sites.

We urge you to be more responsible and to join us in our pursuit for full vaccination of the adult population in Guyana as early as possible, in order to curb this relentless pandemic. It is in the interest and welfare of all of our citizens.