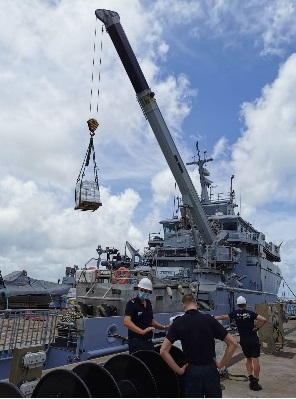 The French Red Cross’ Regional Intervention Platform for the Americas and the Caribbean has rushed 9.45 tons of various items aboard a French military vessel, Dumont d’Urville, to Guyana to assist with flood relief, the French Embassy in Suriname.

The mission said the consolidated “large donation” was dispatched to Guyana “considering the recent floods and the
state of emergency claimed for a large part of the country.” France said the items would “bring first aid and relief for the affected population.”

The French military vessel would leave Martinique, French Overseas Department, and is expected to arrive in Guyana during the weekend.

“Because of the valued relationship between the two nations and in honor of fraternity and friendship between France and Guyana, the donation of this humanitarian aid is essential, and  the relations established between the French Red Cross and the Guyana Red Cross will ensure  swift distribution to those in need,” the French Embassy said.

France says  remains in solidarity with its trusted partners and continues to work on the various forms of cooperation.

For almost one month now, large areas of Guyana have been severely flooded due to overtopping rivers caused by heavy rainfall in Guyana and neighbouring Brazil. Especially in Region 10, riverside houses have been almost covered with water, forcing many residents to evacuate to other homes and government-run shelters.

Overall, almost 30,000 households countrywide have been affected by the floods. The agricultural sector, including rice, sugar, fruits, vegetables, livestock and poultry, have been decimated.

The government has declared a level two disaster in Guyana, paving the way for international aid. The Caribbean Disaster Emergency Management Agency (CDEMA) and other regional and international agencies have started arriving in Guyana to conduct assessments to provide immediate relief and long-term aid.