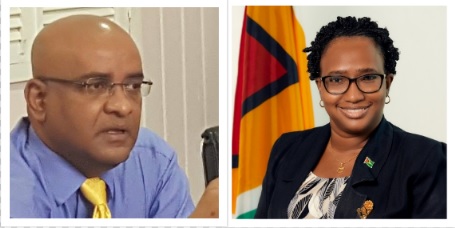 High Court Judge, Sandra Kurtzious on Wednesday upheld her previous decision that Vice President Bharrat Jagdeo must pay Annette Ferguson for defamation because the Court was not convinced with the reasons for the failure by Mr. Jagdeo’s lawyer to file a defence.

She, however, withdrew the GYD$20 million award and ordered that counsel for both parties make submissions on the amount of damages that Jagdeo must pay Ferguson.

She had originally claimed GYD$50 million.

The judge found that none of the reasons given by now Attorney General Anil Nandlall for failing to file the defence, although it had been drafted, were “less than convincing.”

“The explanations offered by the applicant they left the court unconvinced about the accuracy or reasonableness,” Justice Kurtzious said.

Touching on Mr. Jagdeo’s position that he had enquired several times from Mr. Nandlall, the Judge said that should have served as a reminder to ensure that the defence had been filed.

The Court also found that Mr. Nandlall’s arguments that he and Mr. Jagdeo had been busy with legal and political matters were unsound. Mr. Nandlall’s claim that the courts had been closed due to the coronavirus were unacceptable because he had also, by his own admission, been busy in the court with election matters.

The High Court also dismissed the position by Mr. Nandlall that Ms. Ferguson had filed a defamation case against Guyana Times on the same grounds and that that ought to have been disclosed to the Court. Justice Kurtzious said every libel case stands on its merit and at any rate no application had been made for consolidation of the Jagdeo and Guyana Times matters.

The former Housing Minister had claimed GYD$25 million for libel committed on December 5 and December 25, 2020 by making statements that were untrue, and intended to tarnish and lower reputation. Mr. Jagdeo’s comments had been about Ms. Ferguson’s acquisition of her land and house , and her tenure at the Guyana Post Office Corporation.

Hoping that he could have had the default judgement set aside and be allowed to defend himself on the basis of justification, fair comment and qualified privilege as the then holder of the constitutional office of Opposition Leader; the High Court, however, found that fair comment must be made on the basis of facts and they must be stated.

Justice Kurtzious said the allegations, including Ms. Ferguson being “corrupt”, made by Mr. Jagdeo were very serious  referred and he even dared her to sue him. She said no proof had been provided by Mr. Jagdeo and even when Ms. Ferguson had provided proof that she had only owned one house and land at a news conference, Mr. Jagdeo had not taken that into consideration.

The High Court said lawyers for Ferguson and Jagdeo must make submissions on the award of damages by July 7 and she would deliver her decision on July 28, 2021.